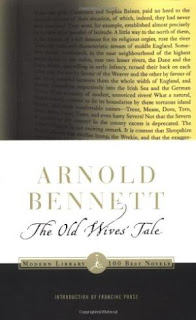 Two sisters, young in the mid-Victorian era--their lives diverge for many years.  One stays at home, marries the assistant, and has a small family.  The other makes a runaway marriage and lives in Paris for 30 years.  In their later years, they reunite.

Lots of realism here--Bennett was an Edwardian with no interest in conveying a message or finding meaning in his novel.  The sisters live their lives and wonder what it was all for.

I do like this novel for its mention of fancy clothing for children!  What we now call heirloom sewing--a hobby of mine, and a particularly oddball one--gets a whole page pointing out that it is really kind of ludicrous.  I cannot disagree; in fact, the first time I saw an heirloom sewing magazine, my thought was "how incredibly impractical!"--and then I got hooked anyway.

This book is set in Staffordshire! 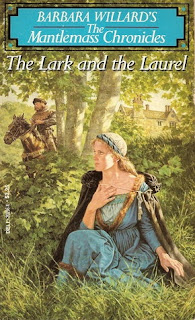 Speaking of  English counties, this next one is for Sussex.  The Mantlemass Chronicles, by Barbara Willard, is a YA historical fiction series.  I was given four of the seven (six?) volumes.  It's a sort of family saga through the generations, though it jumps around a bit, and it centers on the small forest manor of Mantlemass in Sussex.  I thought it was pretty good--well-written, not too focused on the romance, and crammed with history--but it does get pretty tragic.

The first volume, The Lark and the Laurel, is also the lightest.  Cecily, a confined and refined young lady, is sent to live with her aunt at Mantlemass when the Wars of the Roses end and her father is not only on the wrong side, but a turncoat.  She learns to become a capable woman, and foils her father's attempt to use her as a political pawn.  The next three, A Sprig of Broom, A Cold Wind Blowing, and The Eldest Son, handle the next two generations through the Tudor succession and the dissolution of the monasteries.  They're exciting, but tough reading. 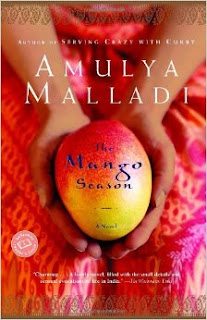 The Mango Season, by Amulya Malladi

Priya has spent the last seven years in the US, getting lots of education and building a life away from her kind of dysfunctional family in Hyderabad.  Now it's time to visit and break the news that she does not want her parents to arrange a marriage to a nice Telugu Brahmin boy; she's going to marry an American.  But the longer she stays, the more frightened she is of telling the truth--her beloved grandfather will disown her, her mother will never accept it, and snotty Aunt Lata will be thrilled to have the ammunition.  Meanwhile there is plenty of family drama anyway, and Priya's visit has some surprising results.  It's a fun, fast read.

I was annoyed by the back blurb, though, which claims that "a secret is revealed that leaves her stunned.  Now she is forced to choose between the love of her family and the love of her life."  I spent half the novel trying to figure out what this secret could possibly be--she can't have a secret American half-brother.  And in fact there is no shocking secret.  So don't expect one.  It's just a good story with no big giant secret. 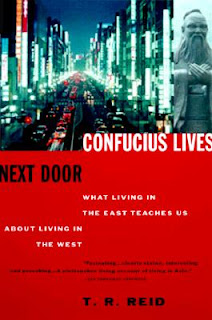 This was a fast and enjoyable read.  Reid moved his family to Japan in the late 90s, and talks partly about his own experiences there and throughout East Asia, and partly about social conditions, with some history thrown in.  His question is, why is Japan such a stable and safe place to live? --with sidelines on Singapore and China, etc.  What cultural underpinnings are the reasons for this?  And what can Westerners learn from Asian cultures?

There are some really interesting stories, and Reid talks a lot about the Confucian underpinnings of Asian societies.  He posits that the moral teachings of Confucius are much of what helps Asian societies to be so stable--but points out that in fact, those morals are not a lot different than other moral systems.  It may be more that Asian societies are more willing to teach those morals all the time--in school, in public, everywhere.  He also points out that, just as in the West, politicians like to use the moral system to push forward their own agendas; authoritarian Singapore uses it as much as the more democratic Japan, but in quite different ways.

All in all, pretty interesting.