By Jean - December 01, 2015
Adam at Roof Beam Reader is setting up a very ambitious challenge for 2016.  (He's also dropping the TBR Challenge, so we'll have to find others.)  Adam says:

About the Event: The Christian bible is one of the most influential texts in western literature. As someone who reads literature for pleasure/edification and who teaches Literature in English at the college level, I frequently re-familiarize myself with many historically rich texts from a variety of mythologies and cultures.... 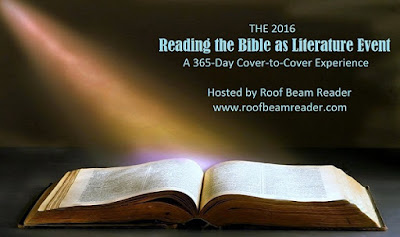 As a special note, I will be reading the bible as literature and crafting my posts as such. This challenge is not specific to nor exclusively meant for Christians; instead, it is for readers who are interested in learning more about a very important text in the western canon. As such, I invite anyone and everyone to participate, regardless of faith or lack thereof. Christian, Muslim, Jewish, Buddhist, Atheist, Hindu, Agnostic, Mormon, Humanist? Come along!

What I would love is a lively and spirited discussion of the stories, philosophies, history, and cultural issues. We might discuss allegory, parables, comparative religion, metaphor, and symbolism to name just a few topics. The text will be treated respectfully and the discussions will follow in that same spirit — disparaging remarks about anyone’s beliefs will not be tolerated (and therefore all comments will be moderated). We’ll do our best!...

The Reading Plan
Adam has chosen a fun edition of the KJV to read--the B&N edition with Doré illustrations, which will be easy for anyone else to get too.  I thought about getting a copy, but it's $20, and since I already have several KJVs sitting around the house, it seemed silly to get a new one just because it has cool illustrations (that I can borrow from my mom's house).  Anyway, it is not a rule to read the KJV -- read whatever edition you want.

I don't actually plan to post about this challenge here--I'll read along and participate in the discussions, which will be posted on Mondays.  I'll maintain an image link on my sidebar, but that's about all you'll hear from me here, I think.  If you want to join in, pop on over to Adam's blog to sign up.
Bible literature challenge