The Absolute at Large 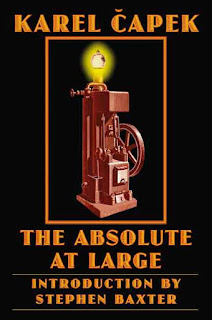 The Absolute at Large, by Karel Čapek

It's Karel Čapek's first novel!  Printed in 1922, two years after the play R. U. R., this is another science-fiction premise, and--at least at first--it's a bit comedic.

It a futuristic 1943, an engineer comes up with a machine (the Karburator) that produces power by annihilating matter completely; the energy contained in each atom is liberated and consumed, thus providing practically infinite power from tiny amounts of fuel.  Unfortunately, it turns out that matter has two parts.  There is the physical part, which produces the atomic energy, and there is also the spiritual component, which, when destroyed, releases the Absolute into the air.  If you conceive of God being present in all matter, well, now it's free and floating around.

Anyone who gets near a Karburator experiences religious ecstasy.  They perform miracles and healings, or give away all their goods to the poor, or start preaching, or perhaps even levitate.  The Absolute is inspirational, and it's also creative; put a Karburator into a factory and it will produce endless fabric or sausage snaps or whatever, no matter what raw materials it starts with.  But it doesn't seem to be intelligent.  It takes on the characteristics of the people it influences.

So the economy collapses because the Absolute does not understand supply and demand.  It simply creates, endlessly.  All the merchants have given away their possessions, and there is no one to move goods. In any case, somebody installed a Karburator in the mint and now there is endless paper money.  Pretty soon, factions arise and there is a devastating global war....

This is a great early SF novel!  I really enjoyed it.  Get hold of a copy if you're interested; it will repay the time.
Eastern European literature SF/fantasy Translation Challenge