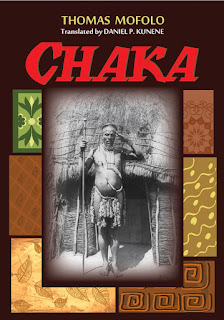 I have here on my desk a pile of seven books to post about.  With most of them, I want to discuss things and talk at length!  But, with everything going on, I might have to do a mini-review roundup.  We shall see.  But for the moment, let us talk about Chaka.

Chaka was written in the Sesotho language in 1909, but not published until 1925 (with some revisions).  It was translated into English in 1931.  It is a fictionalized account of the life of Chaka, the chieftain that united the Zulu tribes through conquest, and then went on to conquer quite a bit of South Africa, in the early 19th century.  Despite the more adulatory legends around his name, Chaka was a brutal warlord who killed an awful lot of people, his own as well as those he conquered, and he was pretty good at the whole thought-policing thing too.

Mofolo writes a story about Chaka that brings in quite a lot of...not symbolism...more like he puts elements into the story to illustrate things about Chaka's character and reign.  The trouble is, you wind up having to look up the real biography in order to figure out what is and is not fiction, and quite a bit of the fiction has found its way into the popular account of Chaka's life.

In the novel, Chaka is the illegitimate son of a king, and even though he is the oldest son--the only one for a long time--he is rejected because the king is being blackmailed.  Chaka grows up persecuted and isolated despite his obvious talents, and only when he leaves his home and meets a doctor/sorcerer who anoints him to become a king does he start to have good fortune.  Chaka enters the service of a neighboring king and proves himself an excellent warrior.  Upon this king's death, he takes over the tribe and begins to conquer others.  The doctor gives him a choice as to how far to go, and Chaka deliberately chooses to become an all-conquering king through black magic.  He becomes...not entirely sane.

Much of this is not factual.  Chaka was not illegitimate, nor did he have a sorcerer mentor who used black magic and gave him two supernatural spy-helpers.  Chaka also did not murder his fiancee and his mother.  These elements are introduced to give narrative shape to Chaka's real political weaknesses and hunger for power.  Mofolo charts Chaka's rise and fall by clear moral markers, but real life was not so clear.  He also writes with sympathy for the child, but gradually deepening moral disapproval for the man.

A very interesting novel!  Also an important one, so don't miss it if you're reading African novels.  Also, I didn't read the introduction until afterwards, which was a good choice.