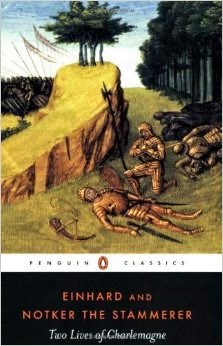 Two Lives of Charlemagne, by Einhard and Notker the Stammerer

Charlemagne, King of the Franks, lived from 742 to 814 and was practically a legend in his own time--which is illustrated by these two accounts of his life.

The first is by Einhard, who actually served under Charlemagne as a diplomat.  It's a straightforward, factual account, not very long, that still manages to get several major things a bit wrong.  Of course, Einhard also glides over some of the less heroic details of court life too; he is strongly biased.  The entire account is strictly realistic; for example, I noticed the incident that was later turned into the Song of Roland.  In the poem, written centuries later, Roland and his men fight off hordes of attacking Moors; Einhard's account shows it to have been a guerrilla-style attack on the rear baggage train by Basques.

Notker the Stammerer was a monk, writing his account for the benefit of Charlemagne's great-grandson, Charles the Fat.  It's a book that collects lots of short anecdotes together, always illustrating the king's character as shrewd, clever, fair, devout, and generous.  By this time, a couple of generations later, Charlemagne was well on his way to legendary status and stories collected around him.  (You can even see Notker doing it as he mixes up Charlemagne with his own grandfather, Charles the Hammer.)  These anecdotes are very entertaining and usually do stay in the realm of the possible, but the footnotes are constantly having to point out that the chronology is all wrong, this or that never happened, or that various people in the story were in fact quite dead by that time.

Einhard is quite interesting, and Notker is downright fun to read.  If you're looking for a fairly easy and short piece of medieval history to enjoy, this is a good possibility.  (Note by the way that I have the really old Penguin edition from 1969, translated by Lewis Thorpe.  The current edition has a new translator, and I'm sure all new footnotes and so on.)