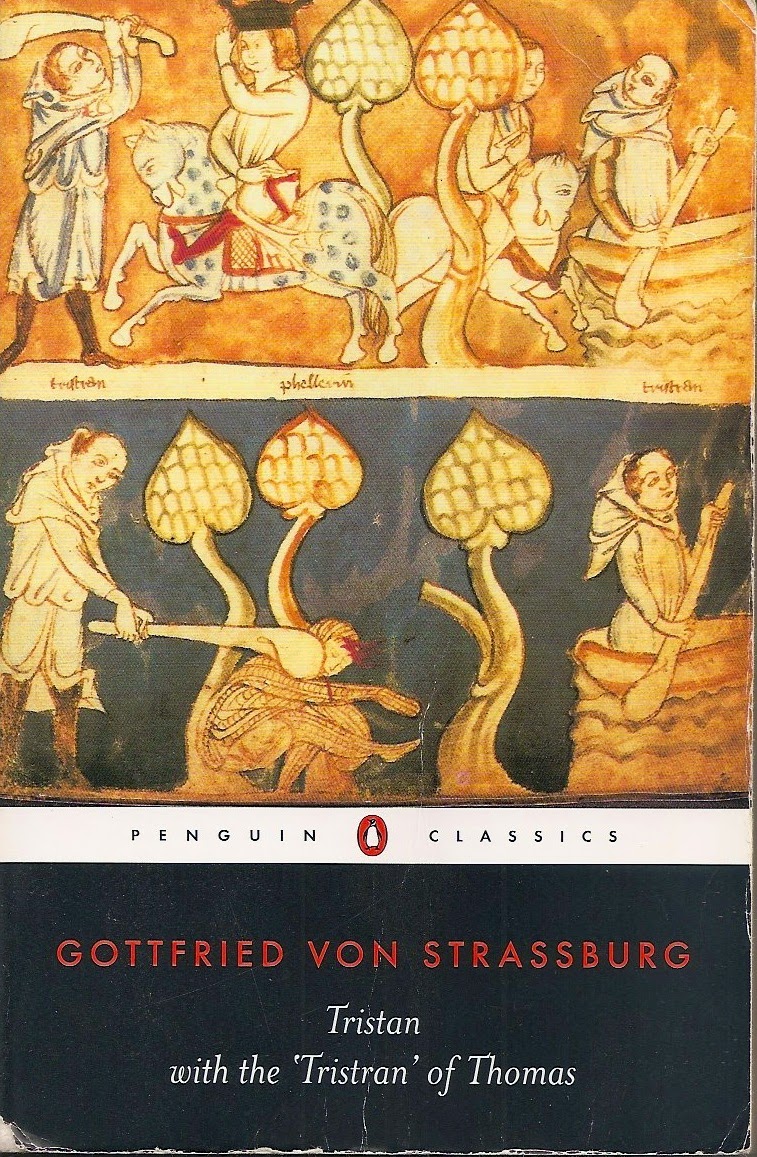 Here's my third version of the Tristan and Iseult story, but the first one that has been available as a complete manuscript.  Gottfried von Strassburg was one of the great German Arthurian writers of the Middle Ages, and though we don't know much about him, he probably wasn't a courtier or a knight.  He seems to have been something more along the lines of a prominent town official.

He might not have been a courtier, but his story is more 'courtly' than the other two I've read, which are more straightforward and rough.  This Tristan has a lot in it about manners and rich clothing, and it's generally more elaborate, with fancy little touches.  It's not so detailed on the fighting; Gottfried is clearly more interested in clothes than in war (maybe he came from a family of textile merchants?).

Tristan gets a whole long backstory, with parents who fall in love and a foster father and a childhood.  That was quite fun; I've never read any of that before.  There's lots of good stuff about King Mark and Isolde's Irish home.  It's a very nice read that moves along pretty well.

Then, of course, there's the fatal potion and love affair between Tristan and Isolde.  Here, there is no three-year time limit.  It's permanent.  It's always interesting to me how the authors deal with this problem that they are in love, they are adulterers committing what would normally be considered a severe crime (queens don't get to have lovers!), but they're also the sympathetic protagonists of the story and it's not quite their fault...but it's still adultery.  You get incidents like Tristan praying:


O Lord in thy mercy and goodness have us both in thy keeping!  Stand guard over Isole on this path!  Guide her every step!  Make the blameless woman somehow aware of this vile ambush which has been set for us, lest she say or do anything that could give rise to ugly thoughts.  O my Lord, have pity on her and me!  I commend our lives and honour this night to Thee!


--this while hoping that Isolde's husband won't catch her talking with Tristan, because they don't want him to find out that they are indeed doing exactly what he suspects.  In fact, Isolde later goes through a trial by fire to prove her innocence, and she passes.  The author of the introduction, A. T. Hatto, explains this by commenting


So far as we can recover his thoughts, the author of the earliest discernible version of the story seems to be saying: 'Well, if the Lord will permit such things as love-philtres to ensnare innocent mortals, be it on his own head!'

Which I think is about right.

The potion does have a definite effect on the two though.  They both become willing to sacrifice everything to their affair, so that Tristan isn't so interested in knightly ideals like honor, and Isolde actually plots the death of her faithful maidservant Brangane.  I've never seen that before, so it was quite interesting to see von Strassburg pointing out the downside to the love potion.  (On the other hand, they also become able to live entirely on Love, needing neither food nor drink!)

This was quite a good read.  Next I'm going to tackle another German story, the Parzival by Wolfram von Eschenbach.  After that I plan to read Thomas Malory, or at least I'll wind up with that, but I'll probably do another Arthur story too.
Arthurian Challenge Germanic literature medieval Pre-Printing Press Challenge