Beauty in the Word 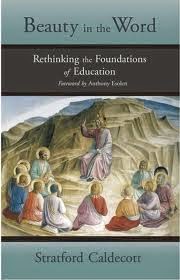 Beauty in the Word: Rethinking the Foundations of Education, by Stratford Caldecott

I read Caldecott's Beauty for Truth's Sake a couple of years ago; it's about the Quadrivium, or the four branches of learning (mostly applications of mathematics) that come after the Trivium in classical education.  This book is a followup, or maybe a prequel, because it's about the Trivium as a foundation of education, specifically within a Catholic tradition.  Caldecott was (he just passed away a couple of weeks ago) a very intellectual and very Catholic scholar at Oxford, and really he's a bit above my head.  I think partly I don't quite understand his very Catholic language, but I gave it a good stab and I'll have a go again sometime.

Caldecott first talks about child-centered methods of education and making them into something that he thinks would be ideal.  He then tackles the Trivium itself in three sections, equating each branch with certain things.  For example, in "Grammar" he talks about memory, imagination, music/dance, and the Father.  Dialectic is thinking, visual arts, and the Son.  He produces a little chart:


After that he gets into the meaning of wisdom, the true goals of education, and what his plan for a Catholic school built from scratch would look like.  He doesn't leave the homeschoolers out and devotes a chapter to parents as educators, too.

This is definitely a book for a more advanced study of classical education.  It is, in fact, a bit too advanced for me.  But I got some good stuff out of it.