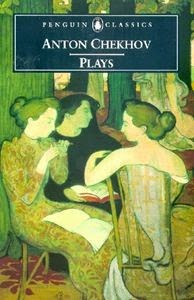 I wanted to read some of Chekhov's plays, and figured I'd better start with the ones I'd heard of.  All three of these plays take place on country estates, with families who are unhappy and feel stifled on said estates.  A funny thing happened while I was reading the first play, Uncle Vanya--I was at the swimming pool with a friend and we were reading.  Hers was a humorous mystery novel, and at one point she laughed and read out to me the line "Stop talking past each other; we aren't in a Chekhov play!"  (Or something like that.  I can't remember exactly.)  So from then on I was watching out for people talking past each other, which indeed they did pretty often, especially in the last two plays.

As always, it would be much better if I could see these dramas performed.  It's hard to keep all the Russian characters straight.  The Cherry Orchard was the trickiest that way. I will sometime.

Uncle Vanya features an old professor, Serebryakov, and his young and beautiful wife Yelena.  All the other men feel that Yelena is wasting her youth on this old dried-up man who complains all the time, and they frequently declare love for her.  Meanwhile, Sonya, the daughter of the house, is in love with Dr. Astrov (who pursues Yelena).   Serebryakov plans to sell the estate, enraging Uncle Vanya, who has sacrificed years of his life to manage the estate and lift it out of debt.  What will Sonya do if her home is sold out from under her?

Three Sisters has the three women living with their brother in their home in a provincial capital (well, one is married, but all the action is in the house).  They long to move to Moscow and spend all their extra energy dreaming about it and planning.  Andrey, the brother, marries a local girl whom they really kind of despise (and who becomes vicious and controlling as the play continues).  The play covers about four years.

The Cherry Orchard shows a woman returning to her country estate after years away.  She and her two daughters are in debt and will have to auction off the estate, yet she cannot stop throwing money around or face the imminent loss of her home, especially the cherry orchard.  Although Chekhov called it a comedy and it does have funny bits, it's much more like a tragedy.

I enjoyed reading the plays, but will definitely need to see them performed and read them again.  This was a good start.
drama Russian literature

Cleo said…
I've read some of Chekhov's short stories but, as yet, none of his plays. I should perhaps try to fit some in, as I've been woefully negligent with reading plays this year.

Arenel said…
I agree it's much better to see them performed! I've seen Uncle Vanya and Cherry Orchard, and both were amazing, although Uncle Vanya was a bit modernized and I don't usually enjoy that.
August 10, 2014 at 9:07 AM

There are two superb film versions of Uncle Vanya. One is obvious, Vanya on 42nd Street, a filmed performance by actors who had been working on the play for years.

The other is hidden. Country Life is Uncle Vanya moved to Australia with surprisingly few changes - and a couple of the changes are improvements.

I have seen a couple of Chekhov at Steppenwolf in Chicago. The joy experienced by the actors was palpable.
August 11, 2014 at 8:27 AM