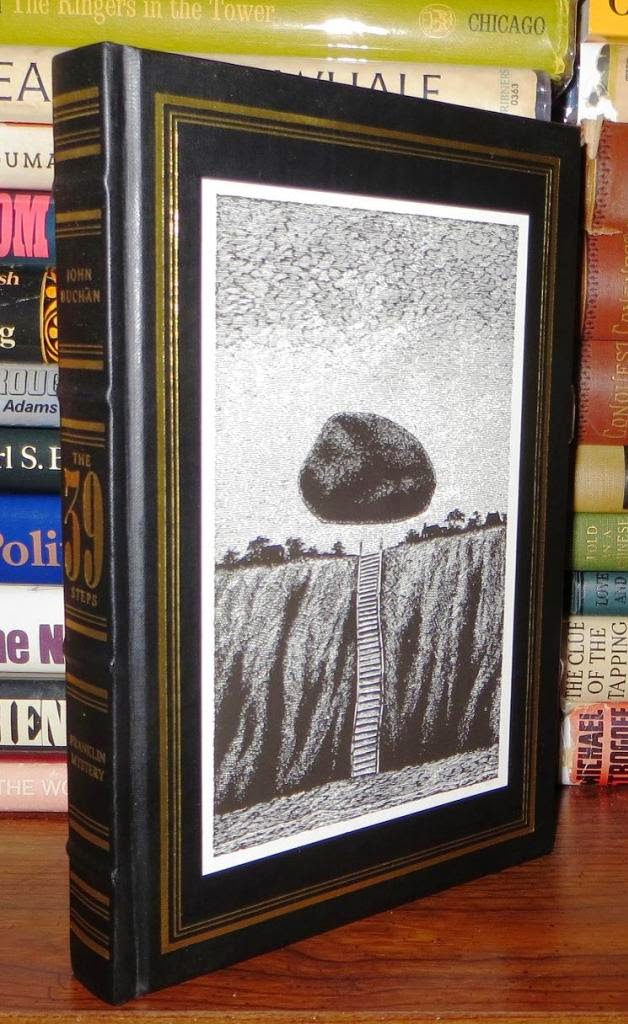 The 39 Steps, by John Buchan

The Back to the Classics Challenge asks for "a classic mystery, suspense, or thriller."  It so happens that I picked up a collection of Richard Hannay thrillers some time back, and the first one, The 39 Steps, is certainly a classic thriller, so I picked that.  And then it so happens that I found a Franklin Library edition for almost nothing--I don't collect those (do any serious readers buy Franklins? To read? I want to know) but this one has illustrations by Edward Gorey.  They are not actually terribly interesting illustrations, with the exception of the cover image, which I share with you here.

It's summer 1914, and Richard Hannay is visiting England after a lifetime spent on the African veldts.  He is bored stiff and planning to leave, when his upstairs neighbor invites himself in and tells a fantastic tale.  The Black Stone gang are planning to assassinate the only man who can keep peace, and he's got the vital information to stop them.  All he needs is to lie low for a month...but it's only a couple of days until Hannay finds him murdered in his parlor.  Now it's up to Hannay to stay a few steps ahead of the Black Stone gang, decipher the code, and prevent a disaster.  He plans to use his knowledge of the veldt to hide in the wilds of Scotland, but the Black Stone is on to him...

It's a pretty good yarn, though surprisingly short.  The murdered spy fellow has a weird thing about "the Jew," so that's more than a little uncomfortable, but it is presented as his prejudice, not the actual villain of the story.  I'd be quite happy to read the other 3 Hannay stories sometime; I always love vintage British mysteries and thrillers.
mystery World War I