The Second Treatise on Government 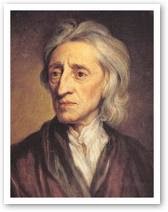 In August, the Classics Club theme is the Enlightenment.  It so happens that Locke's Second Treatise on Government is on my CC list and my TBR challenge list for this year, so I figured this would be the perfect time to read it.

Locke is clearly a genius, but since he was writing over 300 years ago, he isn't all that easy to understand all the time.  He would certainly repay repeated readings.   As some background, he wrote the treatise anonymously, partly to support William III's ascension to the British throne in the Glorious Revolution of 1688 and to discredit James II, and partly to rebut Hobbes' Leviathan treatise.  Hobbes said that since everyone was pretty rotten, people needed an authoritarian government--an absolute monarch--to keep control, while Locke argued that the only legitimate government was one derived from the consent of the people governed.  James II was in the absolutist tradition, and William was supposed to be a king subject to the law.

Locke argues from first principles, imagining people living in a state of nature, with no government--everyone is equal to each other and subject to none.  In such a state, when one person attacks another, that produces a state of war.  For protection and freedom of trade, people might group together, which puts them in a society, and then there have to be laws.  What constitutes property and how do we know when someone owns something?  What does a just society look like?  Who has the authority to administer the law?  What powers does a government justly have, and how can it wield them?  Under what circumstances it might be ethical to overthrow a government?

Locke leads the reader on from one conclusion to the next, building his model of civil society out of clear statements and logical arguments.  It's interesting to watch.  I would like every high school student to read it as part of their government studies, but the fact is that it's a very difficult essay to read now.  I'm sure there are paraphrased versions out there.  It would be interesting to know what modern 'translations' exist, and if any of them try to convey the sense exactly, or if some of them tend to throw in some biases one way or the other.