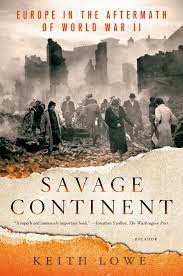 Savage Continent: Europe in the Aftermath of World War II, by Keith Lowe

I've been slowly reading this book for at least half of the summer, and then suddenly someone put it on hold at the library, so I rushed through the last 100 pages in two days.  It is such an awful litany of terribleness that I could only read so much at a time.

Post-war Europe was a destroyed wasteland.  Entire cities had been burnt down.  Many villages were simply gone.  Farmland had been ravaged, and large populations shoved around and killed.  Institutions like schools, police, government, and everything else--were missing, or else staffed by thugs.  In this desolation, people starved, got sick, and perpetrated yet more violence and oppression upon each other.  The Nazis made actions like ethnic cleansing and making populations disappear into routines, and many others copied those atrocities on a smaller scale (especially upon German ethnic groups).  Mixed regions that had been rubbing along for centuries in relative peace discovered that they could get away with slaughtering each other instead.

Lowe chronicles all this with histories of events in areas across Europe, from France to Greece to the USSR.  By the end, everybody has some very serious wrongs to think about (even the usually-surprisingly-benign Danes, who made life miserable for thousands of half-German children).  Eastern European lands, as the triple victims of Soviets/Nazis/Soviets, suffered most as usual, and the results were hundreds of thousands more deaths, as populations were persecuted, deported, and slaughtered, and then turned to do the same back again.

Ethnic minority populations were moved and exchanged all over Europe; Poles shoved out of Ukraine into Poland and Ukrainians into Ukraine, and of course German minorities everywhere were expelled and forced into Germany, which was destroyed and unprepared for refugees.  This was regarded as "the least worst option," Lowe emphasizes, often even by those moved.  Germans, after all, had used their minority populations to start half the war and no one wanted to risk that again.  After World War I, they'd tried moving borders to fit populations and that had obviously failed, so they tried moving populations to fit borders instead.   This really puts the existence of Israel in a whole new light--establishing a country for Jews was only one of a couple of dozen similar actions.

If there's anything I took away from this, it's that revenge is a very natural desire, and that indulging it is a really bad idea.  Reading how all these people enacted revenges and brutalities upon each other in a never-ending spiral of violence was truly awful.  (Yes, OK, the spirals eventually ended, usually in a Stalinist purge of some kind.)  Another really bad idea is nursing communal grudges and victimizations over generations; today, 70 years later, we can observe obvious differences between populations that have moved on and built new communities, and those that have made it a point never to forget or forgive the wrongs done to their grandparents.

Yet another important piece of history we should pay attention to.  Just about all of this was new to me, and Lowe makes the point that we tell ourselves very particular stories about the war for psychological reasons, but the realities were often different, and we've purposely ignored some things.
history

Anonymous said…
Great review! I read this book earlier in the year and it blew me away. Glad you got the chance to read it too.
Indeed, there are very powerful historical lessons we need to learn from. Excellent points!
In case you're curious, here's a link to my review:
http://maphead.wordpress.com/2014/04/17/savage-continent-europe-in-the-aftermath-of-world-war-ii-by-keith-lowe/
August 16, 2014 at 3:20 PM

Jean said…
Maphead, where do you think I got the idea to read the book? :) I forgot to give you credit, though, sorry. I usually try to do that. Everybody go check out Maphead's blog, he always has good stuff!
August 16, 2014 at 3:24 PM

Anonymous said…
LOL!
Glad I'm not the only one who does that!
Thanks for the recommendation!
September 1, 2014 at 9:46 AM