The Sufferings of Young Werther 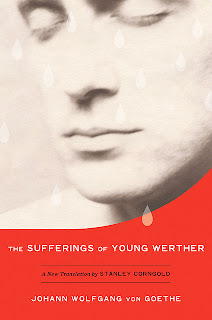 The Sufferings of Young Werther, by Johann Wolfgang von Goethe--translation by Stanley Corngold

This story of a young man's hopeless passion is a classic of Romantic literature, and I gather it was very influential.  Goethe wrote it as a young man and rather regretted it later on as a somewhat embarrassing work (and his best-known; it must have been a bit like being Harrison Ford in 2012 and having people still call you Han Solo).  It was semi-autobiographical and memorialized his love for a young woman named Charlotte Buff.  It's the sort of book you really ought to read when you're twenty years old, because if you wait too long you'll get old and just want to smack Werther instead of weeping over his doomed life.

Werther is an artistic and sensitive young man enjoying a spell of country life.  In letters to his friend Wilhelm, he talks about the wonderful joys of his pastoral lifestyle--until he meets the lovely Lotte.  He knows perfectly well that Lotte is engaged to a good man, but of course he falls in love with her anyway.  He spends all his time at her house, and Lotte (realistically enough) encourages him in forming a very close friendship.  The fiance, Albert, returns and Werther likes him too, but eventually realizes that three is a crowd and gets a job elsewhere.  That doesn't work out, and pretty soon Werther is back, but now Lotte is actually married.

Unable to take a hint, Werther visits Lotte constantly and torments himself with her unavailability.  He forms a hatred for Albert and generally obsesses over what he can't have, getting more and more unbalanced.  Eventually he crosses a line, and Lotte tells him to go--so he kills himself.

Werther is an intelligent and likeable young man, until he allows himself to become so obsessed that he loses his reason and his morals.  (Like Holden Caulfield, he needs a smack upside the head and a summer job in construction--though for different reasons.)  His fate is foreshadowed by his friendship with a local workingman, who has a secret crush on the widow he works for.  The peasant broods over his passion until he finally pleads for his employer to accept him as a lover, and when she refuses, he loses it and tries to take her by force.  Werther is nothing but sympathetic--even when the man stalks and then kills the woman he claims to love, saying that if he can't have her no one shall.  Werther defends him and tries to get him released from prison, believing that his passion excuses everything.  By this time Werther himself seems more interested in possessing Lotte than in listening to her feelings (if he ever was, this being 1774 and all), and eventually starts disregarding her wishes.

This new translation by Corngold is excellent.  Admittedly I don't really have much to compare it to, since I've never read any other translations, but it flows beautifully and is highly readable.  Corngold put a lot of effort into making the language natural, while also never using any English words that were not current in 1775.  I really appreciate the work that must have gone into that, and I think it pays off--it's always so jarring to read something historical and suddenly run into a modern word (like in The Shadow of the Wind, when a character deletes an entry from her office files--in 1935).

I'm not wild about this cover though.  The shiny teardrops are on the schmaltzy side, don't you think?
classics

Anonymous said…
I'm intrigued, but I like the warning you give about trying to read this as a younger person. However, sometimes I like the wanting to slap a character silly. -Sarah

Anonymous said…
I have been meaning to read this for years because my 'thing' is books about historical reading experience and every book about the 18th or 19th century mentions the storm this caused and copycat suicides. I've always been intrigued to find out what thread of overblown emotion the book tapped into!
August 22, 2012 at 1:55 AM