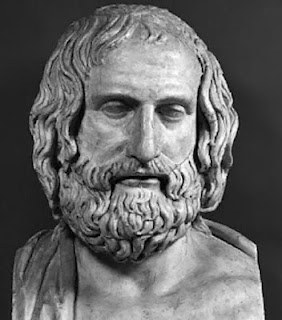 Now that I've covered three plays, let's learn a little something about Euripides.  He is the third great ancient Greek playwright, and younger than Sophocles and Aeschylus, though not by much.  More of his plays survive, partly because he stayed in fashion longer.  Euripides produced 92 (or perhaps a few more) plays during his lifetime, and we have 18 or 19 complete texts and fragments of quite a few more.

Aeschylus and Sophocles both made important innovations in Greek drama, expanding the number of actors onstage and so on.  Euripides built upon this and developed still more innovations.  His plays are more psychological and reveal more of the characters.  He played with form; some of his productions aren't really very tragic and can better be called comedies (in our sense) or problem plays.  He doesn't always put a chorus in.  His audiences must often have been shocked!  On the whole, his plays feel much more like modern plays--they are more familiar in flavor than the other ancient Greek plays I've read.

Euripides' life is a bit hazy, having been obscured by folklore and embroidery.  He was probably born on Salamis.  Tradition gives him two wives and says that both marriages were terrible.  Euripides is supposed to have become a hermit and lived in a cave, where he composed plays, collected books, and meditated.  Eventually he went to Macedonia and died there.

Here is a picture of the cave of Euripides!  Archaeological studies show that it was used for worship in neolithic times, and evidence of offerings to Euripides have been found, but that doesn't mean he lived there. 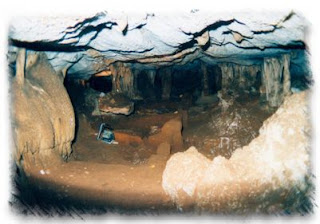 We do know that Euripides was friends with Socrates and was something of a new intellectual type.  He was sometimes resented for this and considered destructive or decadent.  He won few prizes at the dramatic competitions, but that doesn't mean that people hated him, since it was an honor to compete at all.  But he did become more respected with time, as his plays reached 'classic' status (instead of the 'newfangled strange stuff' they may originally have been).
Greek classics