Chronicle of the Abbey of Bury St. Edmunds 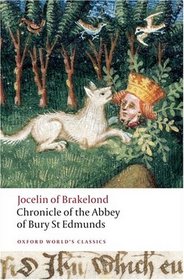 Chronicle of the Abbey of Bury St. Edmunds, by Jocelin of Brakelond

I actually finished a book!  Jocelin of Brakelond became a monk in 1163 and joined the Benedictine abbey that ran his hometown of Bury St. Edmunds in Suffolk.  He was not the recordkeeper for the abbey; he just wrote down stories of the abbey and his own life in a personal account which continues until 1202, which is probably when he died.

I don't know of many memoirs like this from the medieval era, and I don't think I've ever read a medieval account that was so straightforward and full of personal detail.  Jocelin mostly focuses on the abbey's leader, Abbot Samson, his actions, and the monks' opinions of his governance.  Samson seems to have been a very able administrator, but he didn't necessarily worry about making everyone happy.  Instead he dragged the abbey out of debt and made sure everything ran shipshape.  The monks argued over issues all the time, and that's pretty interesting.

There is an enormous, and very medieval, interest in business and legalities.  Throughout the chronicle, we hear about rents, rights, customs, and fees--from huge sums of £500 down to just a penny here and there, it is all carefully accounted for.  It's just the same with legal questions over lands and charters.  But once there is quite an exciting story about Henry of Essex (a crooked courtier) and how a legal suit against him came down to judicial combat!

Great names of the day show up quite often as well.  Bury St. Edmunds was a very important establishment with special rights, and Abbot Samson dealt with kings--Stephen, Henry II, Richard I, and John all appear in the chronicle, along with lots of other important personages.

It's a wonderful portrait of a large, important abbey that dominated a good chunk of Suffolk; unlike many medieval documents, it's easy to see everyone as real people engaged in everyday sorts of business.

This puts me at 8 titles for the Medieval Literature Challenge--the Purgatorio level.  I can't stay there, so I need 4 more books!
medieval