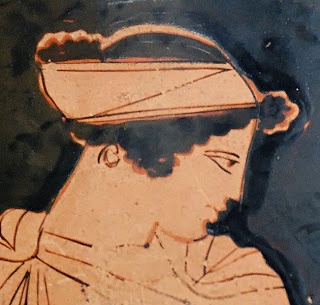 Helen was performed in 412 BC and may have been a companion piece to Iphigenia in Tauris.  Their plots are virtually identical!

Helen, Queen of Sparta, was not carried off to Troy by Paris after all.  Hera gave Paris a magic phantom and spirited the real Helen off to Egypt, where she was placed under the protection of the king.  Helen has been waiting ever since for Menelaus to come and rescue her, and her time is running out; the old king has died and the new king wants her for his wife.  It's now been 17 years since she arrived in Egypt, so hope is fading, and she has taken refuge at the old king's tomb.

Menelaus, meanwhile, has been wandering for 7 years, trying to get home.  Shipwrecked on the coast of Egypt, he hides his companions and his (phantom)wife and arrives at the palace.  Once they recognize each other and Menelaus is convinced, Helen hatches a plan for their escape.  It is a very similar plan to Iphigenia's.

It's an interesting play, but it's also exactly the same as the play I just read, so that was kind of odd.  Either Euripides was stumped for new plots, or he meant for the two plays to be performed together to make a point.  Once again, homesickness for Greece is a major theme, and Euripides gives the innocent victims of myth happy endings.

I think my favorite part was the bit where Menelaus' servant comes running onstage to break the news about how Helen, hidden away in a cave, has suddenly disappeared.  The real Helen explains all, and the servant's reaction is entirely realistic--wait, 10 years of war and misery and 7 years of wandering around and all our friends dead...for nothing??