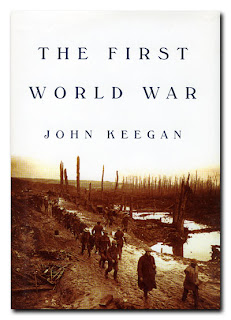 I do not enjoy reading about World War I, which always seems to me to have been such a horribly avoidable and pointless war, fought for almost no reason at all.  But we have to learn about it, because the Great War created the modern world.  Most of what happened in the 20th century can be traced back to WWI, and of course that continues now.

John Keegan's book is an overview of the entire war.  It can't get into details or personal stories much; the perspective is from the heights.  I found it difficult to get into for this reason, though it's not a flaw in the book--that's just how it has to be in order to get the story told.  Still, it's a dense book about war tactics, which is never easy for me to read.  I've been working on it for months, bit by bit.

Keegan explains some on the reasons that World War I was such a mess.  For one thing, the state of technology at the time dictated the entire shape of the war, trenches and all.  They could produce incredible piles of weaponry--mainly shells of different sorts--but could not aim them all that well, so they shot unbelievable amounts of the stuff.  Artillerymen also invariably gave advance warning of an attack as they shot off trial rounds (for hours!) to adjust aim.  Communications technology, however, was not advanced enough to keep up with the military's needs; just a few more years of development would have made all the difference.  Radio and telephone did not yet work well enough for orders to be transmitted quickly--it was spotty at best and always broke down in a battle.  Commanders had to be well behind the lines in order to coordinate orders, and they tried to plan carefully for the lack of communication, but the result was always inflexibility.  Taken together, these two conditions helped to cause much of the pointless butchery that characterized the entire war.

One of the sections that caught my attention the most was about the navies and sea battles.  Battleship technology was developing very quickly, and Keegan does a great job of explaining how it all worked.  It was very interesting.

Keegan's writing flows very well and he gets a lot of information into his space.   Here's a sample:


[Britain] had by the end of 117 enlisted every man that could be spared from farm and factory and had begun to compel into the ranks recruits whom the New Armies in the heyday of volunteering of 1914-15 would have rejected on sight: the hollow-chested, the round-shouldered, the stunted, the myopic, the over-age.  Their physical differences were evidence of Britain's desperation for soldiers and Haig's profligacy with men.  On the Somme he had sent the flower of British youth to death or mutilation; at Passchendaele he had tipped the survivors into the slough of despond.

Most of what I knew about World War I was patchy, gleaned from various historical fiction stories or history books that focused on one aspect of the war.  I'm glad to be able to fit all those little bits into a big picture.

I read this for the WWI Challenge, which finishes it off for me.
TBR challenge World War I