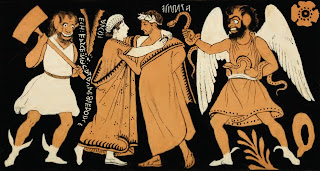 This is the earliest known play by Euripides, but that's only because we're missing so much.  He had been producing plays for nearly 20 years by the time Alcestis was performed.  It was an unusual performance because this play was presented as the fourth of four tragedies, instead of three tragedies and a then satyr comedy.


Alcestis is dying in place of her husband, the king Admetus.  This has been the deal for some years--Admetus was told that he could avoid death (for a while) by getting someone to die in his place.  His parents refused but his wife agreed, and today is the day.   Admetus is grief-stricken, wailing about losing the best wife in the world and blaming his father and mother for not stepping up in Alcestis' place.  Their reaction is about what yours would be--"Look, you could have just done it yourself like you were supposed to.  Alcestis' death is on you, not us."  Alcestis says:

I die, who did not have to die, because of you.
I could have taken any man in Thessaly
I wished and lived in queenly state here in this house.
But since I did not wish to live bereft of you
and with our children fatherless, I did not spare
my youth, although I had so much to live for. Yet
your father, and the mother who bore you you, gave you up,
though they had reached an age when it was good to die
and good to save their son and end it honorably.
You were their only one, and they had no more hope
of having other children if you died.  That way
I would be living and you would live the rest of our time,
and you would not be alone, and mourning for your wife
and tending motherless children.  Not, but it must be
that some god has so wrought that thing shall be this way.
So be it.  But swear now to do, in recompense,
what I shall ask you--not enough, oh, never enough,
since nothing is enough to make up for a life...

So Alcestis dies.  While the house is in mourning, Admetus' best friend Heracles shows up.  Admetus is so concerned with being a proper host that he lies to Heracles about who has died.  Once Heracles figures it out, he heads off to rescue Alcestis from the grave!  The tragedy thus has a happy ending as Alcestis returns as a reward for Admetus' hospitality, and she is rewarded too for her courage.

The attitudes about the situation are tricky to unravel.  There's no question that Alcestis is an ideal wife, extraordinarily courageous and loving.  Admetus, on the other hand, is a trickier prospect.  There are distinct hints that he comes up lacking; what kind of man asks his wife to die in his place?  This is not a Patient Griselda story, where the wife is put to a test of virtue given by a husband who is entitled to do so.  If this is a test, Alcestis passes but Admetus fails, though he repents and does better in the second round.

What struck me in this play was how much it showed about how Greeks felt about death.  All of these people fully expect to live for a relatively short time on earth, and then spend the rest of eternity underground as a shade, which isn't a happy fate at all.  They cling to life in the sunshine, wishing to spend as long a time as possible on the beautiful earth--although at the same time talking about how very difficult life is, with suffering and pain and loss.  Life in ancient Greece was short and full of suffering, but still better than the afterlife as a sad shade.
Greek classics

o said…
Jean, I cannot believe it: we must have been writing our reviews at the same time! There is 10 minutes between your review going up and mine!

I loved this play, and as I said in my review, I loved reading about their thoughts and beliefs about death and life.

Amy said…
What a lovely, lovely speech by Alcestis. I so want to read this play now. And you're right; so many nuances to tease out--guilt and innocence, family relations, attitudes toward death. Thanks.
August 23, 2012 at 6:54 PM