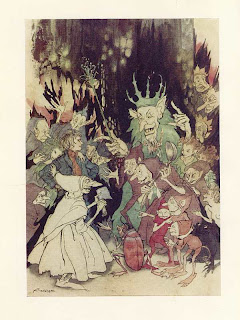 Ibsen's play Peer Gynt is probably not as famous in the US as Grieg's suite of the same name, but apparently they were first performed together, with some of the music accompanying the play.  It is a fairly early play, and is written in verse--it was the last time Ibsen wrote a verse play.  The story is based on a hunter character from Norwegian folklore named Per Gynt (why did Ibsen change the spelling?  I must say I quite like the name Per, I have a friend named Per, but I don't like Peer), but it's set in the 19th century.

I peeked at the original text for a minute (I'll look at it more) because Wikipedia says it's written in "Dano-Norwegian," which seems to mean that it's not so much in what we would call Norwegian as sort of mostly Danish but not entirely.  Both languages have changed in the last 100 years so it's not easy for me to tell, since my Danish is pretty rusty anyway, but the online text was pretty readable for me.

Peer Gynt is a rascally young man.  He doesn't help his mother run the farm, he tells tall tales, he steals, he's a mischief-maker and he has grandiose ideas about himself.  He's become unpopular, in fact.  After pulling a particularly rotten stunt, he runs off and has adventures all over the world.  The settings change from fairy-tale to reality and back again, as Peer spends his life cheating and procrastinating.  In the end, he returns home in a sorry state, but his true love Solveig has been waiting for him and he finds redemption in her arms.

WHY Solveig has waited for him all this time is a mystery to me, but it's probably symbolic or something.  There's a lot to dig out in this play, about selfishness, individuality, and forgiveness.  At the same time, it's often funny. Peer gets into scrapes all over the place, and mostly he does not behave the way he should.


I've been humming bits of the Peer Gynt music for 2 or 3 days now...
classics TBR challenge