By Jean - August 06, 2012
On my trip, I took along the Symposium, which is probably about the easiest work of Plato out there.  Before I get into that, let's find out a little bit about Plato himself-- 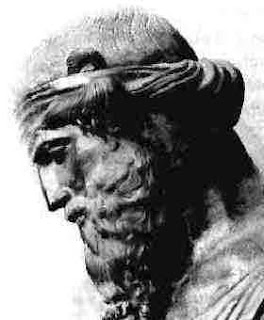 Plato's name was really Aristocles; his nickname came from his broad shoulders.  He was a wealthy guy who belonged to an aristocratic Athenian family that descended from the old kings of Athens.  He was a talented young man--athletic, musical, clever, and brave (he won a prize for bravery against the Spartans).  A couple of his uncles were followers of Socrates, and Plato followed suit when he was twenty.

Plato learned to dislike Athenian democracy.  His uncle was killed in the civil war between the Athenian factions of aristocrats and democrats, and a few years later, he was present at the execution of Socrates.  He therefore left Athens and wandered for several years, once having to ransom himself out of slavery.

Once Plato returned to Athens, he bought a sacred grove belonging to the god Academus, which became his Academy.  There was no tuition, women could attend as well as men, and the students learned music, literature, law, history, mathematics, astronomy, and of course philosophy.  And as everyone probably knows, he is still known today as one of the most important philosophers ever.


The Symposium is a dialogue that takes place at a dinner/drinking party (symposium).  All the characters are real people, but this is a dialogue with structure and a point, so if it has any root in reality at all it is heavily fictionalized.  The characters are: Agathon (a poet and the host), Aristodemus, Aristophanes (the comic dramatist), Eryximachus (a pompous doctor), Phaedrus, Pausanias (a lawyer), Alcibiades (the soldier and politician) and Socrates himself.  Each member is required to give a speech in praise of the god Love.  What exactly Love means varies throughout the discussion; Socrates elevates Love to a spiritual phenomenon, which in its best and highest form has no physical component, but in the beginning of the dialogue it's fairly synonymous with infatuation and lust.  At no time does Love mean romantic love between a man and a woman; here, women are firmly relegated to the lowest animal sphere.  One must marry a woman and have children with her, but she is never a true companion (since Athenians hardly ever let their women out of the house, that may have had something to do with it).  In Plato, Love is only possible between men, who are the best people to love because they are manly.

Everyone takes turns describing what sort of a god Love is, and what Love is all about.  Aristophanes comes up with the comic interlude (I think?) when he tells a familiar 'just-so' tale.  But the real point of the dialogue is when Socrates takes the stage--and spends the whole time talking about how he learned the true nature of Love from a woman (!) philosopher named Diotima of Mantinea.  This is where we learn about Love as a lifelong companionship, a partnership of minds that is ideally without a physical aspect.  Thus our modern term, "Platonic love."


Later on I'll be reading the Republic, and I hope to read some Aristotle too.  I took Rhetoric on the trip, and started it while riding in the car, but after a couple of pages I realized I would need a pencil!
Greek classics

Brian Joseph said…
Symposium is a really interesting work. I posted commentary on it on my Blog back in February. I also highlighted Plato's references to Diotima of Mantinea!

The philosophical and spiritual analysis of love in this work is fascinating!
August 11, 2012 at 7:06 AM

Unknown said…
I've always been curious about this one. Both it and the Republic have been on my list for a long time. I'm glad it was so interesting!
August 13, 2012 at 7:41 AM