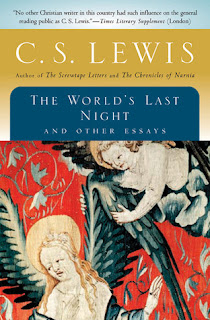 A couple of weeks ago I was listening to a talk on reading good books that mentioned the essay "Lilies That Fester," by C. S. Lewis. I thought I had read that essay before but could not find it in my books, and ended up downloading this book on to my tablet. It's a collection of several essays, and only one of them was one I was familiar with. Bonus!

Most of the essays were on topics relating to Christianity, such as prayer, evidence (or not) for belief, the doctrine of the Second Coming, and so on. One of my favorite lines was from the essay "On Obstinacy in Belief," in which he addresses the common idea that belief in Christianity or other religions is simply a matter of wish-fulfillment:

"...There are of course people in our own day to whom the whole situation seems altered by the doctrine of the concealed wish. They will admit that men, otherwise apparently rational, have been deceived by the arguments for religion. But they will say that they have been deceived first by their own desires and produced the arguments afterwards as a rationalization: that these arguments have never been intrinsically even plausible, but have seemed so because they were secretly weighted by our wishes. Now I do not doubt that this sort of thing happens in thinking about religion as in thinking about other things; but as a general explanation of religious assent it seems to me quite useless. On that issue our wishes may favour either side or both. The assumption that every man would be pleased, and nothing but pleased, if only he could conclude that Christianity is true, appears to me to be simply preposterous."

There were lots of other good bits, but that one was easy to find again. The essay I went looking for, "Lilies That Fester," is about educational and cultural issues and really I got a lot out of it; Lewis made some points about education (especially in literature) that I had not thought of in that way, although some were addressed in Richard Mitchell's Graves of Academe too. I am glad that I hunted that essay down.
150+ Challenge 52 books