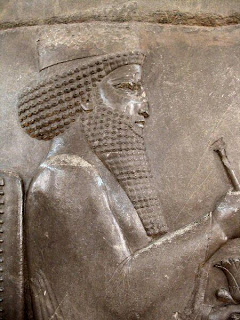 I finally finished Book III! It was actually really interesting; it just took me a long time. Life keeps getting in the way. I've had an exciting week--last week I did a bunch of prep for National Library Week (and today I got to see my lovely displays out), my brother and his family came for the weekend, and Easter became our least favorite Easter ever when my older daughter accidentally met a peanut-butter egg disguised as a Cadbury egg. She was sick for most of the rest of the day, but she's fine now.

Anyway. Book III is all over the place compared with Books I and II. There is conflict between the Persian Empire and Egypt, Persian maneuvers to make war with Greece or Babylon or Arabia, and most of all, how the Magi staged a coup for the Persian throne, putting Darius in charge. This is the Darius known as Darius the Great; he also gets a friendly mention in the Bible because he let the Jews start rebuilding the temple (but there are three different Dariuses!). Here is a portrait of Darius the Great for you.

This book is just chock full of trickery and machinations and general drama in several different countries, so it's quite fun to read, but it's hard to follow because it's a bit scattered. There are also some very far-fetched stories about winged vipers in Arabia, and what is known about the borders of the earth. Herodotus knows that amber comes from the far north (Scandinavia/Baltics?), but does not believe in a river flowing to the northern sea.