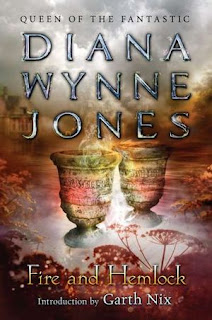 Kristen at We Be Reading is hosting the Fire & Hemlock discussion today! Drop by and participate. This post will try not to have any spoilers in it, but the discussion will have plenty.

Polly is packing up her things to go back to college when she runs across an old paperback book of stories. But surely the stories were different before? Polly realizes that she has double memories about her life, but how could they be true?

This is my favorite of all DWJ's books, and one of the most complex. I don't know if anyone fully understands the ending. Fire & Hemlock pulls material from the old ballads 'Tam Lin' and 'Thomas the Rhymer' about the Fairy Queen's habit of ensnaring young men--for sacrifice, or for consuming. Polly is Janet, trying to save her love from the Queen, but Janet's methods won't work this time.

Other elements of the story are taken from T. S. Eliot's Wasteland poem, which is also written in four parts. I should really set myself to reading that poem and studying it properly, because the one time I tried, I failed utterly. (Modern poetry is not my strong point. But now it's going on my Classics Club list, so I have to do it.)

I love Jones' Fairy Queen, Laurel. She has so many names, and they all mean something--Lorelei, Mabel, Tatiana, Eudora, Leroy, Perry. She's pretty terrifying; she sucks the life out of everyone around her while maintaining an image of soft, delicate femininity. Going up against Laurel is a losing game. She gives dangerous gifts--Tom's gift is that anything he says will come true and come back to hit him.*

There are little hints sprinkled throughout the story, both to Polly and to the reader, about what is really going on. Most of them are easy to miss (I probably haven't found them all yet), and many are literary. You don't have to be familiar with all the literature mentioned (and some that is not) in Fire & Hemlock to enjoy it, but it does add depth and resonance to the story. DWJ always needs rereading to get everything out of the story, and this story is worth several reads.

*DWJ had something of this "gift" herself, it seems; she often found herself inexplicably living through scenes she had written as stories.
150+ Challenge 52 books

Kristen M. said…
I noticed much more this time through how little Laurel is actually in the story. She's such a menacing force that seems omnipresent but we only see her a couple of times and she never *does* anything. It's Morton Leroy and Seb that do everything. She really is a queen.