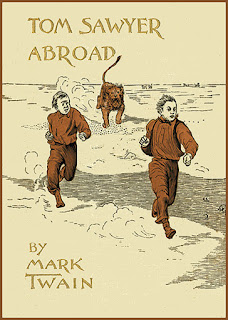 I found these at the library when I checked out the original Tom Sawyer story; I had no idea they existed. I thought I'd better read them too.

Tom Sawyer Abroad is very Jules-Verne-esque. Tom, Huck, and Jim accidentally get kidnapped on a new kind of airship flown by a peeved eccentric. They have all sorts of wild adventures and it's quite fun (though about as accurate as you'd expect--apparently the Sahara is just teeming with lions and tigers).

Tom Sawyer, Detective has Tom and Huck on a steamboat to visit a relative. On the way they meet a thief on the run, and when they get to their destination, Tom is able to solve a mystery and amaze the town--always his favorite activity.

The fun thing about these stories is the interaction between Tom, Huck, and Jim. Tom fancies himself to be pretty educated, and indeed he is a smart kid, but he's a living example of Pope's "a little learning is a dangerous thing." He pontificates and condescends to Huck and Jim, whose earthy common sense rebuttals often leave him confounded--or else stunned into silence.
150+ Challenge 52 books