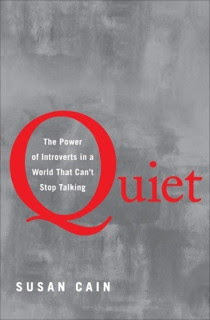 Quiet: the Power of Introverts in a World that Can't Stop Talking, by Susan Cain

Susan Cain has been generating quite a bit of buzz lately with her TED talk about how it's not bad to be an introvert. I hadn't meant to read the book right away, but I ran into it so I thought I might as well.

It's quite interesting! Cain talks about what we know now about the various elements of personality and the spectrum of extro/introversion. For about a century now, Americans have admired extroversion and deplored introversion, and the results have not always been good--we need to understand and respect both viewpoints.

Cain goes around and visits various locations and events; she heads out to Saddleback Church to learn about how Christian evangelism admires extroversion and unintentionally makes the quieter folks unhappy. She goes to a Tony Robbins seminar, which sounds an awful lot like hell. Then she visits a weekend retreat for highly-sensitive folks and realizes that without a few outgoing folks to liven things up, the quiet becomes deafening.

I learned in this book that IBM used to have a company song! When I mentioned it to my dad, he promptly started singing it. He used to work for IBM and apparently they tried to make him into a sales guy at one point.

It's a very interesting book that really tries to share the message that both kinds of people are important; we can't really do without either one. But we also need to try harder to understand, respect, and use the introverts around us, because they have a lot to contribute.
Posted by Jean at 6:18 AM

I haven't read this yet but it's always nice to see someone sticking up for us introverts. We are useful and interesting too! :p