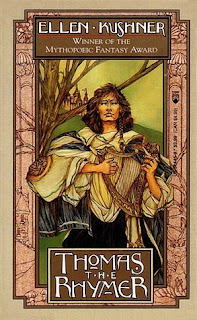 Thomas the Rhymer, by Ellen Kushner

In preparation for the Fire & Hemlock read-along and discussion (coming up this Friday!), I did a little pre-reading. I opened up my Child's Ballads and found the stories for Thomas the Rhymer and Tam Lin. And I picked up Ellen Kushner's version of the ballad/legend of Thomas the Rhymer. In the stories, Thomas is a bard who is picked up by the Fairy Queen and kept in Elfland for seven years. Upon his return to the human world, he has the power of truth-telling or prophecy.

This retelling was part of the "Fairy Tales" series of books published in the early 90's. I had most of them! They all have the same vaguely Celtic/Art Nouveau cover art by Thomas Canty, which was quite stylish at the time. (Pamela Dean's version of Tam Lin was also part of this series, but I didn't feel the need to read it again for this project.) Some of the stories--Tam Lin and Briar Rose, for example--were put into modern settings, but Kushner's story inhabits a timeless, medieval fairy-tale Scotland.

It's not a bad story, but it's also not really my kind of thing now. I had completely forgotten it, though, so it was a nice reminder.

NOW I am going to read Fire & Hemlock!

Edit: Having now read F&H, I realize that Kushner's Lady pales in comparison to Laurel. The Lady is enchantingly beautiful and amoral, of course, but she's pretty benevolent on the whole. Laurel, on the other hand, is greedy and manipulative and vengeful and scary under her beauty.
150+ Challenge 52 books