By Jean - April 08, 2012
Katherine at November's Autumn hosts a monthly classics discussion. This month is on book covers, and here are the ones I've been reading lately.

...I love so many Classic book covers, they usually have a beautiful painting or portrait on the cover. This month's focus is the
Book Cover
The old and worn adage of never judging a book by its cover is partly true but a book cover tells the reader a lot about what's inside you can usually tell what genre it is or what time period it takes place in.
Level 1 What are your first impressions as you look at the cover? Level 2 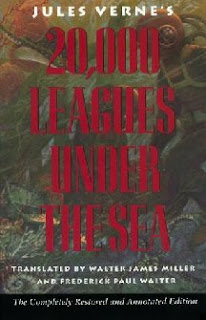 Does the book cover have an aspect that reflects the character, setting, or plot of the novel? Level 3 If you could have designed the book cover what would you have chosen?


The cover for 20,000 Leagues Under the Sea is rather disappointing. It has this very nice painting of the characters exploring underwater, but that is hardly visible under the giant red type. The whole thing ends up muddy and difficult to look at. I would have featured the two elements separately (and not a red title), or perhaps used one of the great lithographs that were included in the text. 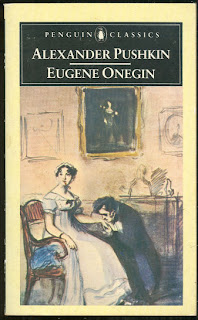 I just finished Pushkin's Eugene Onegin in an elderly Penguin Classics edition. I am quite fond of those very old Penguins--the ones that are black, with a plain sans-serif font, though I don't like sans-serif fonts as a rule. I used to have a poster that looked like those old Penguins, with a portrait of (I think) Erasmus and the words "The Library of Every Civilized Person," which I loved even though it's as pretentious as all get-out. This image is of the same illustration on a later Penguin edition--I'm also fond of these ones and have a lot of them since they were being printed when I was in college. They had a color code that was almost entirely mysterious.

The picture is a painting done for the poem, but it's an incident from the very end, so I spent the whole time wondering what it was supposed to be. While I like the cover, I don't think it works all that well for that reason. I wonder if any other pictures were done by the same artist? 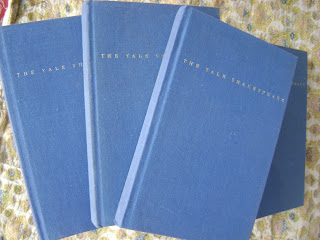 e plays I've been reading with my daughter lately are from the same set--my beloved Yale Shakespeare. I have the whole set, which makes me very happy! I used to buy the odd volume in college, but about 10 years ago I was lucky to get the whole thing when someone donated it to the library book sale and I got there first. They don't have any pictures on the cover or anything; they're just plain blue. They have reproductions of cover pages from early printings inside, and are set in 50's type.

I think I prefer the lack of cover art on these anyway; cover art is so easy to get wrong and so difficult to get right! Sometimes you don't need it much.


Nowadays classic covers very often feature a painting of some kind. That's fine with me, but I like the painting to plausibly match the book. I don't like it when the time periods clearly don't go together--say, a Regency girl on the cover of a mid-Victorian novel, or when they just slap a random pre-Raphaelite painting on there.

While I'm quite happy to read modern paperbacks, I think I love old books better--as long as they're not falling apart so they're unreadable.