What the Tortoise Taught Us 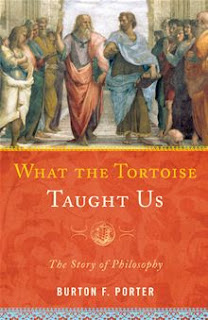 What the Tortoise Taught Us: The Story of Philosophy, by Burton F. Porter

I am very disappointed by What the Tortoise Taught Us. It's supposed to be a short overview of the history and development of philosophy, starting with the ancient Greeks and ending with current ethical arguments. The philosophical history does seem to be accurate, as far as I can tell--but I picked the book up because I don't know much about the subject and wanted to learn more in preparation for my Greek challenge, so I'm not really in a position to judge. The real problem with this book is that it is riddled with egregious errors in the "interesting anecdotes" liberally sprinkled through the narration.

I think most of us have an area in our heads where urban legends and unattributed anecdotes and quotations slosh around. We've all heard or repeated the story about Walt Disney being frozen somewhere in Disneyland. Porter seems to have given that part of his mind free rein in this book, throwing off quotations and stories where he thought they would fit, but without checking to see if they were accurate or even true. By the end I was waiting for him to tell me that ducks' quacks do not echo. I expect a higher standard in a book that claims to be a history written by a scholar. If a student at my school uses this book as a source, he'll be repeating inaccurate information, so I'll be recommending that this title be pulled from the collection on the grounds that it is not reliable.

I'm going to list some of the problems I found, but I'm sure I didn't find all of them. This is just what struck me:

The first, and worst, error is on page 8, as Porter introduces Greek ideas: "'In the beginning was the logos,' the book of Genesis states, which is usually translated as 'word.'" I really can't believe no one caught this. It's the first line of the gospel of John in the New Testament-- "Ἐν ἀρχῇ ἦν ὁ λόγος, καὶ ὁ λόγος ἦν πρὸς τὸν θεόν, καὶ θεὸς ἦν ὁ λόγος." Porter not only mixes up the Old and New Testament, he seems to think that the ancient Hebrews were Greek-speakers. I can see how someone not too familiar with the Bible would get this mixed up, but a moment's thought--or a decent editor--should have corrected this.

On Stoicism, "...we cannot say that anything in the future is inevitable, even with regard to commonsense assertions, such as 'The sun will rise tomorrow'...the earth could stop rotating at some point..." (p. 54) Well, no, it couldn't. Anything strong enough to stop the earth's rotation would also destroy it, and the bits would still spin. The earth is slowing down, and someday it will rotate once a month, like the moon--but it can't stop. Angular momentum is stubborn stuff.

On page 112, Porter tells two apocryphal stories. First is Galileo dropping things off the Tower of Pisa, which is a popular historical anecdote that most historians agree never happened (see this excellent summary). Then there is a story about William James and an audience skeptic who claims "It's tortoises all the way down!" This is another popular anecdote often attributed to various public figures (and turtles; I presume he wanted to go with the tortoise theme), most often James, but the story seems to go back much further than that.

In a section on linguistic philosophy, Porter says, "Some critics have even charged that language philosophers have focused exclusively on English...This seems arrogant, and it did not help when one analyst remarked, 'If English was good enough for Our Lord, it should be good enough for us.'" (p. 168) This is one of those quotations that gets attributed to anyone people want to poke fun at, and is most commonly credited to Governor Miriam "Ma" Ferguson of Texas as "If English was good enough for Jesus Christ, it ought to be good enough for the children of Texas.” However, it was floating around before that, put in the mouths of various country folks as a proof of ignorance, and has no solid origin that I can find. If a real linguist said it in earnest, I want a citation.

After that is a section on feminism, which starts off: "As one feminist put it, men regard women philosophers the way they do an elephant dancing: it's not that they do it well; it's only surprising they can do it at all" (p. 169). I cannot find this quotation as stated, or anything like it. All I can find is Samuel Johnson's famous quip of 1763: "Sir, a woman preaching is like a dog’s walking on his hind legs. It is not done well; but you are surprised to find it done at all."

Porter then describes Mary Wollstonecraft, who is usually considered to be the first vocal feminist: "She echoed Elizabeth Cady Stanton that women should regard themselves not as adjectives, but as nouns" (p. 170). There are two serious problems with this sentence. Elizabeth Cady Stanton was born in 1815, 18 years after Wollstonecraft's death in 1797, so it would be difficult for Wollstonecraft to "echo" her in anything, and I cannot find any instance of Wollstonecraft ever saying anything about adjectives or nouns. Porter goes on to state that Wollstonecraft was supported by Samuel Johnson, but in fact she was supported by the liberal publisher Joseph Johnson, not the famous wit and dictionary-writer (who, as above, was not much on women's equality).

The rest of the section on feminism has its own problems with stereotypes; it is generalized to the point of absurdity, crediting all feminists with theories on feminine ways of knowing that are in fact claimed by only a few.

In another error concerning Samuel Johnson, Porter credits him with defining man as "the tool-making animal" (p. 180). That definition belongs to Benjamin Franklin, but Johnson did argue against it in 1779, saying, "But many a man never made a tool: and suppose a man without arms, he could not make a tool." I'm not sure what Porter has against poor Dr. Johnson.