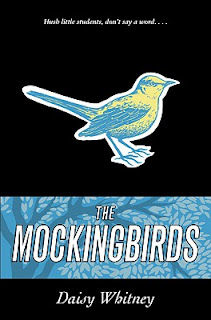 The Mockingbirds, by Daisy Whitney

Themis Academy is one of those prep boarding schools for highly talented teenagers, but the administration has a blind spot. All the adults seem to be under the impression that these students are so stellar that they would never do anything wrong, so there is no real structure for dealing with problems. When Alex is date-raped, there is nothing she can do--unless she decides to go to the Mockingbirds, the student-created justice system.

It's a great story and Whitney does a good job of drawing you in. Most of her teen characters feel like real people. Alex has to learn to stand up for herself and for what's right, and it's a hard struggle.

The scenario seems implausible to me--I think most prep schools have figured out by now that even highly talented teens have problems and do bad things--but it's interesting because it forces a situation where the students have to figure out a system themselves. That raises more than a few questions about secret vigilante groups, which I think will be addressed again in the upcoming sequel, The Rivals.

The author did, in fact, have a part in forcing colleges to pay attention to the issue of date-rape when she was a student (back in the early 90s when schools were only just starting to realize that date-rape is a thing that exists and that it's a crime), so I thought that was interesting.
52 books