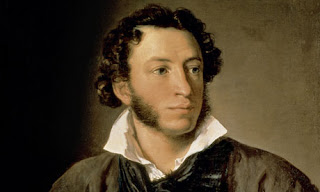 Alexander Pushkin: The Tales of Belkin, The Queen of Spades, and The Captain's Daughter

Pushkin is generally thought to be Russia's greatest poet, and the father of true Russian literature. He was, mostly, a Romantic, but in a quite different way than Keats or other well-known Romantic poets; he was Russian through and through. He died quite young in 1837, from duelling wounds--Pushkin was constantly embroiled in duels. His zeal for reform made him an inspiration to generations of Russian rebels and reformers. I read a selection of his shorter prose.

The Tales of the Late Ivan Petrovich Belkin is a collection of very short stories that are anecdotes of life in the country. Some are romantic, others are stories of coincidence, and there is one ghost story. All take place in the country, in small villages or lonely outposts.

The Queen of Spades is a short story about a girl fooled into a romantic intrigue by a young man who only wants to get at her aunt's legendary secret. Tchaikovsky made an opera about it as well, which I've never heard of. The story itself is great.

Finally, I read The Captain's Daughter, a fast-moving short novel about a young soldier (and, of course, his true love) caught up in Pugachev's Rebellion of 1774.

All of these are wonderful, and I'd recommend them if you're looking to learn a bit about Russian literature.


Pushkin was not in the least Victorian but I'm counting him for that challenge anyway, since the rules are pretty fluid and he did at least die in the year of her succession.
read around the world Victorian