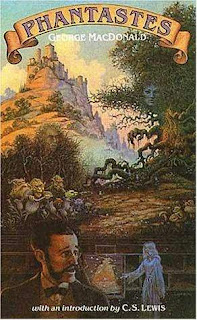 I suppose you could call this a very early prototype of the modern fantasy novel. MacDonald called it "A Faery Romance," and it's the story of Anodos (which means something like 'upward path' in Greek), a young man who enters Fairyland and wanders there, searching for his ideally beautiful woman, who appears to him twice as a statue. Aspiring to knighthood in imitation of Sir Perceval, he achieves a few good deeds, but every time someone warns him not to do something, he promptly does it and suffers the consequence. Imprisoned by his own pride, he has to learn humility and how to give up the selfish parts of his love for his ideal.

The story seems a bit shapeless to modern tastes; I think we're used to more established plots in fantasy novels, which is now so much more developed (and clichéd) as a genre. MacDonald was writing something without a lot of precedent in 1858, and he's not bound by so many expectations. It's a lovely book, though not always easy to understand.

I read this half in print and half on my tablet. The print in my paperback goes right into the binding and is difficult to read, and then I misplaced it for a few days. I downloaded a free Google books copy and read it at night too. Unbelievably, this is my 15th Victorian book of the year, which puts me over the top for Subtle Melodrama's challenge. I made the "Desperate Remedies" level! Woo!
Victorian