By Jean - November 09, 2011
This one is not quite my usual thing, and it looks like a lot of fun. I have never seen the 2003 movie "The League of Extraordinary Gentlemen," but evidently it gathers heroes from several novels and pits them against two literary villains. The challenge is to read every character's book. Here are the rules: 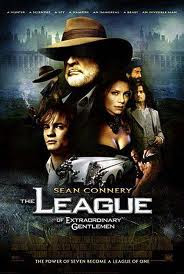 Your mission, should you choose to accept it, is to read the original book featuring each of the main characters and post a review of each between 1st January 2012 and the 31st December.

Every single one of these books is out of copyright (which is how they could be used in the first place) and so are free for download on most e-book readers.

Even if you don't complete the challenge, it's great fun watching the film and knowing a little more about the characters!

The main characters and their books are:

Captain Nemo from 20,000 Leagues Under The Sea by Jules Verne

Tom Sawyer from The Adventures of Tom Sawyer by Mark Twain

Rodney Skinner from The Invisible Man by H.G. Wells (kind of)

I've read a few of these books, but in most cases it's been years. And I have to say I'm not really looking forward to The Phantom of the Opera. I've been successfully avoiding Phantom-mania since high school! (I went away for a year, and when I came back everyone was raving about it.)
League of Extraordinary Gentlemen Challenge