Feminist Classics: Ain't I a Woman? 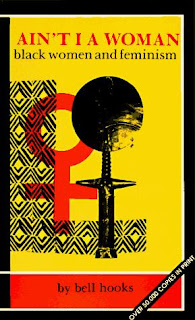 Ain't I a Woman?: Black Women and Feminism, by bell hooks
This month we read bell hooks' 1981 book Ain't I a Woman, which chronicles the massive injustices black women have endured in America, from colonial days right up to the time the book was written. I completely agree with hooks' main premise that black women have suffered from a double bind of racism and sexism. It's hard to argue with that! It was both fascinating and painful to read; I had to take it fairly slowly.

I did feel like she made more generalizations and used more stereotypes than she maybe should have. It's possible that in 1980, academics hadn't yet gotten obsessed with making those distinctions in the way that we do now, but I would have expected a lot more language along the lines of "many black women..." or most white women..." and so on. Or, in the first section on Colonial history, she does seem to use a lot of stereotypes about religion at the time and I think she makes overly-broad statements. Especially, she talks a lot about Puritan hatred of sex and women; and while, yes, Puritans were not exactly female-positive types, they did consider sex within the marital bond to be an important good for both husband and wife. A wife could legally complain to authorities if her husband was not giving her what she wanted, which would seem to imply that Puritans didn't hate sex as much as their popular image claims. Then, most black slave women didn't live with Puritans at all.
It's sometimes hard to tell exactly what it is hooks wants. I spent some chapters reading long lists of injustices and wondering what her solution is. I know she is against racism and sexism and capitalism and imperialism and patriarchy, but I'm not sure what economic system she does want. She wants all people to be treated like human beings--I'm all for that--but concrete suggestions are lacking. Maybe the suggestions would amount to "stop discriminating against black women," but I can't help feeling that if you're going to denounce capitalism you should say what you'd like to replace it with.
Sometimes, I couldn't help feeling that hooks is blaming people for being fallible human beings. She's certainly correct about all the racism and sexism; it's just that some of her listed injustices--such as white feminists hanging on to racism, or using the feminist movement for their own personal benefit (to careers, etc.)--are no more than we can expect from human beings, and hooks is not one to make allowances.
People do usually care much more about their own problems than about others' problems, even when others are suffering more. We are tribal in nature and will usually think of other people as The Other until presented with plenty of reasons to include them in the tribe. And as far as I can figure out from reading history, imperialism is an intrinsic part of human behavior; a group is either expanding its power over others, or it's shrinking and losing power, and that's been going on since the earliest times that we know of. To whatever degree these behaviors can be changed or eliminated, it can only be done through cultural habits, education, and training. Even so, I think people will always fail somewhere, and will usually be utterly blind to those failures until they are pointed out over and over. I can understand hooks' anger and dismay at so many failures to accept black women as equals; it is indeed an awful record, and I'm not saying she shouldn't be talking about it. It's just that most of human history is pretty awful and disappointing.
Hooks' thesis is solid and she tells a lot of truths that make you think. I'm very glad to have had the opportunity to read this. She ended with a wonderful 1892* quotation from an address of Anna Cooper (go and read the whole thing, and sorry about the weird coloring I can't seem to fix it):
Let woman's claim be as broad in the concrete as in the abstract. We take our stand on the solidarity of humanity, the oneness of life, and the unnaturalness and injustice of all special favoritisms, whether of sex, race, country, or condition. If one link of the chain be broken, the chain is broken. A bridge is no stronger than its weakest part, and a cause is not worthier an its weakest element. Least of all can woman's cause afford to decry the weak. We want, then, as toilers for the universal triumph of justice and human rights, to go to our homes from this Congress, demanding an entrance not through a gateway for ourselves, our race, our sex, or our sect, but a grand highway for humanity. The colored woman feels that woman's cause is one and universal; and that not till the image of God, whether in parian or ebony, is sacred and inviolable; not till race, color, sex, and condition are seen as the accidents, and not the substance of life; not till the universal title of humanity to life, liberty, and the pursuit of happiness is conceded to be inalienable to all; not till then is woman's lesson taught and woman's cause won—not the white woman's, nor the black woman's, not the red woman's, but the cause of every man and of every woman who has writhed silently under a mighty wrong. Woman's wrongs are thus indissolubly linked with undefended woe, and the acquirement of her "rights" will mean the final triumph of all right over might, the supremacy of the moral forces of reason, and justice, and love in the government of the nations of earth.