Week 46: Through the Language Glass 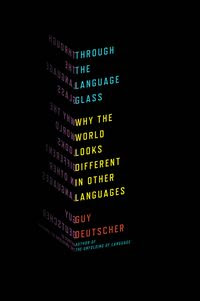 Through the Language Glass: Why the World Looks Different in Other Languages, by Guy Deutscher

If you've ever learned to speak a second language fluently, you know from personal experience that other languages come with a slightly different way of thinking. But linguists have been arguing for years over exactly what that means, and what the limits are. Quite often, popular assumptions have led to wildly bigoted conclusions. Deutscher tackles some of the more intriguing corners of language in this book, and he does it very well; his writing is interesting and doesn't get too bogged down in minutiae.

Deutscher covers three language topics in detail: color, direction sense, and gender. All turn up some really surprising results. We start off with Homer, who doesn't really talk much about color at all, but if you collect all his color references and look at them, they are very strange. Everyone recognizes 'wine-dark sea'--but since when is the sea the color of wine? And he calls both hair and sheep 'violet.' Oddest of all, according to Homer, honey is 'green.' Why on earth should that be?

I won't spoil the rest of the book; go find out yourself why honey would be called green--and why English doesn't really have noun gender any more.
52 books