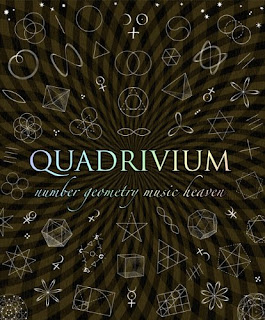 This is a very, very pretty book. To look at it is to want it. It's full of lovely little diagrams, and the ink gradually changes from brown to green to navy to deep purple.

It's a collection of 6 smaller books on the four classical liberal arts. The first is on numbers, and it's a nice little collection of traditions and neat information about simple numbers. Then it's on to flat geometry; through the basic pentagrams to arches and patterns. The third book is on solid geometry and has a lot about Platonic solids and the neat permutations you can make from them. Next is an odd little section on geometrical designs that can be made with a harmonograph--sort of like a spirograph, only using harmonic sections. It's interesting but difficult to understand.

The last two books, on music and astronomy, are quite hard to wrap your brain around, or at least they were for me. The musical book has a lot to say about harmonic intervals and all sorts of things that I know very little about, and the one on cosmology is all about orbits of planets and their harmonic intervals. It's neat, but most of it was beyond me and it may have gone into the region of woo, but I can't tell; it would take someone who knows a lot more mathematics than I do to tell. It gets quite weird, anyway.

The publishers, Wooden Books, seem to specialize in this kind of small, pretty book that's probably too New Agey for its own good.
52 books