Week 4: Strength in What Remains 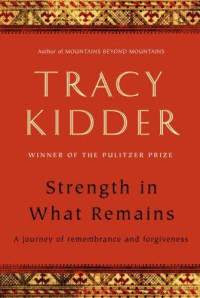 Strength in What Remains, by Tracy Kidder

You always know that Kidder is going to come up with something good. This new-ish volume focuses on a young man named Deo as he arrives in New York City, a Burundian refugee with a couple of hundred dollars in his pocket and almost no English. The narrative jumps back and forth between Deo's new life in New York (virtually homeless, delivering groceries, but getting a foothold and gaining friends) and his past in Burundi (his rural childhood, medical school, and the war that destroyed his country). With the help of friends who realize his intelligence and potential, Deo attends medical school in the US, joins Paul Farmer at Partners in Health, and begins his efforts to bring medical care to the people of his homeland.

The war and genocide in Burundi is not nearly as well-known as the slaughter in neighboring Rwanda, but the countries have two branches of the same root problem. Burundi is also a former Belgian colony with a mixed Hutu and Tutsi population, and though events took a different direction, they were quite similar.

This is a great book, and if you're interested in global poverty and what can be done about it, Kidder is a good author to read. I'd recommend that you start with Mountains Beyond Mountains, an earlier book about Paul Farmer.
52 books read around the world