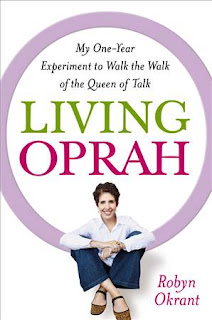 Living Oprah, by Robyn Okrant
This is one weird book. It's one of those Year-Long Projects, where the writer does X for a year--living Old Testament rules, buying only absolute necessities, etc.--and then writes about it. Robyn Okrant decided to live according to Oprah's dictates for a year. She watched the show, read the magazine, got the emails, and if Oprah said to buy it or do it, she did. This resulted in a huge list of ongoing life directives, plus having to do a study course on a Eckhart Tolle book (a fate worse than death!).
I picked this book up because I found the idea of giving all your decisions over to a talk-show host to be pretty horrifying. I could not do that at all. Okrant knows it's horrifying, but she also likes Oprah and wanted to do it as a sort of research/art project on women's lives.
One thing Oprah wants you to do is to spend a lot of money. The financial aspect of this project was huge, at least to my eyes. Okrant kept saying that she lives on a tight budget, but she spent thousands on this, and I was kind of appalled (our current dire finances probably influenced that--to my mind, she wasted a lot of money). I hope her book royalties make up for it. Oprah also wants you to live within your means, eschew consumerism, and not waste money. She wants you to eat healthy food (and gives out expensive recipes), but also pushes cupcakes and ice cream. Oprah wants you to get rid of clutter, and also to put out knick-knacks, decorate your home, and buy lots of stuff. Oh, and you need to dress way better, and don't think that's cheap. In other words, Oprah is a living women's magazine, constantly pushing contradictory messages that are meant to remind us that we are fundamentally not OK and need to buy lots of stuff to help us improve--even if it's yet another book on decluttering or how to save money.
Okrant recognizes these contradictions, and ponders them often, but also insists that Oprah genuinely wants to help people and probably doesn't do it on purpose. I'm not so sure about that, but then I'm not an Oprah fan. (I've never watched an episode, but I've seen a few clips here and there.) I don't actively dislike her either, I guess. But Oprah does not really figure largely in my personal universe, except when I'm in line at the store and examine the magazine cover for Photoshop mistakes.
Okrant does get some pretty good things out of the year. She loses weight, tones up, her house is a bit neater, she has a few moments of insight. On the whole, however, trying to follow all that advice is hugely stressful. It's tiring, and she doesn't see her friends as much. Her husband should get an award for his patience (I think she calls him Saintly McSainterson at one point). And towards the end, she described herself as lacking her usual vibrance and enjoyment. In an interview for Forbes, she answered a couple of questions:
Following all of Oprah's advice for a year took you a total of 1,202 focused hours--about 75 full days, excluding sleep. What was it like?It was incredibly draining, and it made me really sad. It made me sad to think of how many hours I've lost--even when I wasn't doing the project--to blindly following advice and listening to what other people tell me I should be doing to create my own happiness. I wondered how many hours other women have lost in the course of their lives to that.

How many women do you think follow Oprah's every word?

I hope none. There are shades of the ridiculous in what I did. There was irony. I wanted to provide an extreme example of what we do on a daily basis.

So it was an interesting book. One of my favorite parts was Oprah's advice for living frugally and greenly for a week, which included: not going out to eat and eating your leftovers, drinking filtered tap water instead of bottled, turning your thermostat way down to 69 degrees, and limiting your showers to 8 minutes maximum. All of these seem like ordinary life to me, especially the shower rule; since I've lived in drought-ridden California my whole life, I'm surprised by anyone who takes more than 5 minutes to shower--and if you were really doing it right, you'd only have the water on for half that time. 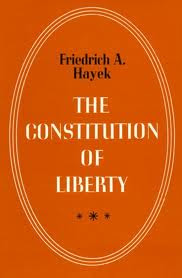 The Constitution of Liberty, by F. A. Hayek

This...is a giant book. I thought the Road to Serfdom was difficult to read, but this one is harder and took me most of a semester (I found it in September in the college library). However, it is well worth the time and effort it takes to read it. It was published in 1960, but every few pages I would run into bits that were directly applicable to current affairs; it was a bit uncanny how very well Hayek understood the direction things were going in and where they would end up. I found it very relevant to the US in 2011.

Hayek analyzes liberty and how it works in great detail. The first section deals with the theory of liberty, the second section covers historical developments in different countries, and the final section gets practical (and easier!), talking about specific elements of a welfare state and whether they can co-exist with liberty. He talks quite a bit about how old-fashioned socialism of the Russian type, with the state taking over all industries, is being discredited and replaced with social-justice/welfare-state ideas that are easier to implement, but which will have a similar effect in the long term.

It should be noted that Hayek uses the terms 'liberal' and 'conservative' in the older European sense, as in classical liberalism (Thomas Jefferson and co.) and aristocratic conservatism. He is a very abstract writer and virtually never uses concrete examples, so he is dense and not easy to read.

Hey, look at that--the National Review put The Constitution of Liberty at #9 on a list of "The 100 Best Non-Fiction Books of the 20th Century."

And for your edification and enjoyment, a music video: