Week 3: Planet Narnia and Enemies of the People 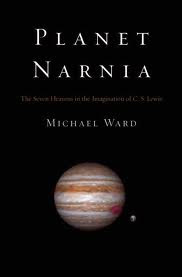 Planet Narnia: the Seven Heavens in the Imagination of C. S. Lewis, by Michael Ward

Countless Lewis fans and scholars have speculated about whether the Narnia books were written according to any system or just sort of dashed off as a hodgepodge of imaginative fun. Several symbolic systems have been proposed--the seven sacraments? the seven deadly sins, or the virtues?--but no theory ever really stuck until a couple of years ago, when Michael Ward came along. Ward's thesis is that the Narnia books were written to accord with one of Lewis' favorite symbolic systems--the seven medieval planets.

Planet Narnia devotes a chapter to each planet, first describing Lewis' scholarship and poetry about each one, then how each is treated in the Space Trilogy and finally given the fullest treatment in a Narnia story. Ward decided to invent a new word for the way each planet suffuses its story, never appearing in full view but always informing the atmosphere and mood of the entire book.

If you're unfamiliar with the philosophy and symbolism attached to the planets in medieval cosmology, all of this will be completely strange. Lewis wanted to bring that symbolism back; he felt that modern ignorance of it was a great loss. In particular, he wanted to bring Jupiter back as a symbol of particular ideas and feelings which are now lost to us. This does not mean that he believed in astrology as we now know it; he loved the medieval image of the universe, and believed that it was very valuable for reasons other than scientific advancement. His point was philosophical and religious.

Even though The Discarded Image is one of my favorite books (so I should have known better), I was skeptical when I first heard of this planetary theory. Ward's scholarship is completely convincing; I think he's absolutely correct about it. Planet Narnia is dense and does not go quickly, but it is really enjoyable and I learned so much. (When I went and looked for links, I found that he has written a simpler, less scholarly version called The Narnia Code.) It's well worth reading several times. If you are a fan of C. S. Lewis at all, this book is a must-read. I am not kidding. Go read it now. 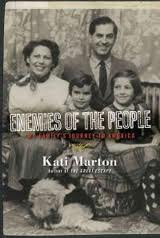 People: My Family's Journey to America, by Kati Marton

Kati Marton's parents were well-known journalists in Hungary in the 50's. They were friends with Americans and worked for Western news outfits. They were open anti-Communists. They were well-educated and really kind of elitist, they wore natty clothes, and they even drove a fancy car. The surprising part is that they were not arrested sooner, but the Hungarian secret police felt that they would lead to good information--after all, where could they go? The Martons were under constant surveillance, and everyone they knew was pressured to inform on them. Eventually they were arrested and interrogated for months--Endre Marton, the father, spent 18 months in prison--and then let go. The Martons got out of Hungary and ended up in America, where they were watched by Hungarian spies and the FBI as well.

Having survived so much (I haven't even mentioned the war!), they were determined to become ordinary suburban Americans and forget the past. They told their two daughters very little--not even that they were Jewish. But when Hungary's government changed, the secret police files were declassified, and Kati could go and see all the files on her unusual parents.

Kati Marton is also a journalist, and she tells her parents' story--and her own--in a series of flashbacks interspersed with her modern research and efforts to find some of the people she knew long ago. It's a fascinating story: her Hungarian childhood, with physical and intellectual luxuries other children couldn't know, but which also brought constant hostility and danger--and then her parents' struggle to do their work and cope with the immense strains on them.

So, it was a great book that gave me a lot of insight into a part of the Cold War that I didn't know much about, and I recommend it. It also counts for the "Read Around the World" challenge for Hungary.
52 books read around the world