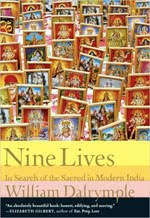 Nine Lives: In Search of the Sacred in Modern India, by William Dalrymple

I found this at the library where I work and of course I had to read it. Dalrymple describes nine different people, devotees of their religions, and talks a bit about how traditional practices in India intersect with the modern world. The nine people are: a Jain nun, a Dalit worker who spends three months of every year dancing in the role of a god, a devadasi (dedicated/sold as a child to the goddess, which means she's a prostitute), a man who sings an ancient epic, a woman who lives at a Sufi shrine, a Tibetan Buddhist monk living in exile and penance, an idol maker, a devotee of Tara (more famously known as Kali) who lives in a graveyard, and a Baul singer. Several of them live on the edges of society, in self-imposed poverty; some were raised to their work, others chose it in defiance of their families.

Dalrymple tends to concentrate on lesser-known traditions; though several Hindus are profiled, only one could be called mainstream, and there are no Muslims, Sikhs, or Christians at all. Some of the practices described go back a thousand years or more, but are in some danger of disappearing now, between a modern uniformizing of Hinduism and an Islamic movement towards conservatism. On the other hand, it's consistently surprising how tenaciously many modern Indians cling to old traditions. It's a really interesting and well-written book, so if you're interested in Indian religions, this is an excellent book to read.


Post-note--I guess this title would count towards the 52 Books "Read Around the World" mini-challenge. It features India and Tibet. Since I like to read about other places, I'll try to keep track of the countries I read about and see what happens.
52 books read around the world