So Long a Letter 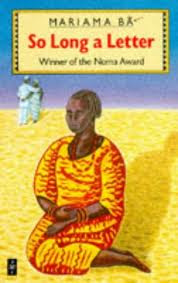 So Long a Letter, by Mariama Ba

I have to thank the "Year of Feminist Classics" project for introducing me to this book! Mariama Ba's novel is a long letter from one Senegalese woman, Ramatoulaye, to her best friend Aissatou. Both women lived for years in marriages they thought were happy, until their husbands each took younger second wives, as allowed by their Islamic religion. (It doesn't seem to me, however, that either husband truly acted the way an Islamic man is supposed to act.)

The women respond differently to their husband's actions; Aissatou leaves her husband and gets a job abroad, while Ramatoulaye, a teacher and mother of 12 children, chooses to stay--but her husband abandons her anyway. Ramatoulaye writes her long letter just after her husband's death, during a prescribed period of mourning.

I was very interested in the writer's portrayal of polygamy in her society. Both husbands have faithful wives who work hard to serve them, as their culture demands. Ramatoulaye has 12 children, a full-time job, and a house to run, and she speaks of her husband with love. Yet he and Aissatou's husband both spring the second, younger wives on their first wives; there is no warning, just a family friend bringing the news that the wedding is already over. Aissatou's husband claims to feel that he has to marry the girl out of duty, since his mother (who dislikes Aissatou's background) has raised her to become his wife. He promises that he will treat both wives equally, but Aissatou is not about to put up with this, and she simply packs up and leaves. I understand her reaction, but I understand Ramatoulaye's very different response too.

Ramatoulaye thinks seriously about leaving, but--despite her family's disapproval-- decides that staying is a better choice for her. She prepares to share her husband according to religious duty; but he deserts her and the children and never comes near. In a way, this gives her a satisfactory resolution, since she has the result without the difficulties of divorce.

Ramatoulaye never stops loving her husband, though of course she is angry at his betrayal, and ridicules his obsession with the young Binetou, who was their daughter's best friend. Ramatoulaye, a believer in following the heart over material considerations, portrays the younger wife as something of a victim of her more blameable ambitious mother. She feels that Binetou was pushed into her position and isn't truly happy being married to a much older man, despite the luxury she lives in.

Ba manages to explore a lot of territory in her short novel--besides polygamy, she looks at unwed pregnancy and the tactics women will resort to when they can find no other way of ensuring security for themselves and their families. Mariama Ba attacks the social strictures placed on women in her society while honoring the ways they choose to cope with their situations.
Feminist read around the world