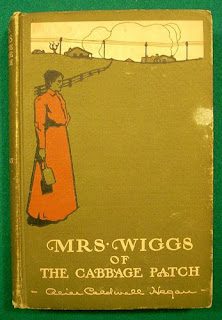 This odd little book was once considered an American children's classic, a bit like Five Little Peppers. Published in 1901, it was an instant hit and was made into a play--and later on a film and radio series. Since then it has sunk into obscurity and no one hears of it now, but 50 years ago it was in every library.

Mrs. Wiggs and her children live in the Cabbage Patch, which is a shantytown outside a city modeled on Louisville, Kentucky. They are in dire poverty, and though Mrs. Wiggs is a determinedly cheerful woman, things are looking bleak. Almost the first thing that happens is the tragic death of her oldest son, who has been the man of the family for some years. After that things improve a bit, and the Wiggs family has comedic adventures and trials, helped along by a couple of benefactors--who, of course, get to have a romantic happy ending.

Here's a scene from the 1934 film, which bears no resemblance whatsoever to anything in the book. W. C. Fields is in it!