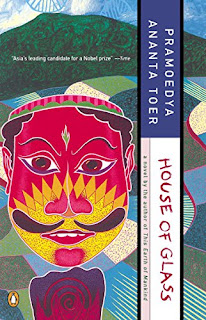 It's the last of the Buru quartet!  Toer wrote these novels while he was imprisoned at the Buru Island detention camp.  They were published in the 1980s, but banned in Indonesia until 2000.  Here are the previous three titles:

This Earth of Mankind
Child of All Nations
Footsteps

Together, these tell the life story of Minke, who was loosely based on Tirto Adhi Soerjo (1880 - 1918), a native Indonesian journalist who criticized the Dutch colonial government. At the end of Footsteps, Minke is exiled from Indonesia.

House of Glass actually moves away from Minke during his exile and is narrated by Jacques Pangemanann, a Native police officer who admires Minke, but also possesses a talent for explaining Native movements to the Dutch government.  Pangemanann has always wanted to be a Good Guy, keeping the law and bringing down the Bad Guys, but his long-awaited promotion dumps him into a much more complex world.  Now he's working for the colonial government, analyzing, explaining, and recommending what course to take when it comes to Native organizations working for improvement.  He admires Minke and his work -- and his whole career is dedicated to the opposite.  He's done exactly what nearly every educated Native wants to achieve; he's got a good government job.  And it's killing him, because the government is making him work against his own people.  Does the law exist to help  people, or to control them?

Pangemanann assiduously collects all of Minke's papers, which include his journals -- the manuscripts of the first three books in this quartet.  He reads them over and over, and never shares them with anyone.  Meanwhile, World War I starts, distracting the government.  He is haunted by a ghost and develops a major drinking problem.  He becomes impossible to live with, and his wife leaves him, taking the children.  He actually moves into Minke's empty house.  And when Minke is finally allowed to come back to Indonesia, it's Pangemanann's job to meet him and try to force Minke to sign an agreement never to write again.

Poor Pangemanann is trapped into being a tool of the colonial power that oppresses him, and as he loses his integrity, his self-respect, and his principles, he is ever less able to find a way out.

It's an interesting way to end the quartet -- Pangemanann always feels Minke's spirit judging him, but the real Minke is almost entirely absent.    There's probably enough material in these novels to fuel a dissertation or two.  I'm very glad I was able to read this set of books; I don't think they're as well known as they should be!