Genghis Khan and the Making of the Modern World 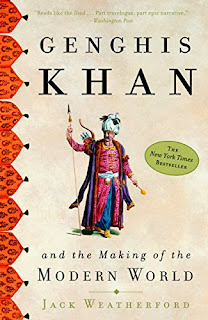 Genghis Khan and the Making of the Modern World, by Jack Weatherford

This was actually an assigned title in my kid's world history class this semester, and I decided to read along so we could discuss the book.  (I guess homeschoolers never die!)  It turned out to be a very interesting and exciting book, with plenty to discuss and argue over.

The first half of the book is a biography of Temujin (Genghis' original name), who nobody would have picked out as an obvious world-conqueror.  Mongols all lived on the edge, but after the death of Genghis' father, the family nearly starved.  Bullied by his older half-brothers, Genghis learned to assert himself (by killing one of them), put himself under the protection of a powerful lord, and eventually rose to power through a combination of ruthlessness, practicality, and quick wits.  He proceeded to take over all the Mongol tribes and then pushed outward.  By the time of his death, he was the Golden Khan, head of a massive empire stretching across much of Asia.

The second half follows Genghis' descendants.  His sons, like most sons of a conqueror, were not nearly as strong-willed and there was constant infighting.  But the empire continued to grow, and when they followed the rules set down by Genghis, they did incredibly well.

Weatherford is surprisingly pro-Genghis, considering the massive violence inflicted on Asia.  He acknowledges the bad stuff, but is mostly focused on showing readers a Genghis the West has never known, one who -- as murderous conquerors go -- wasn't all that bad.  He points out that the Mongols were mostly anti-torture or mutilation, unlike their contemporaries, and they were uniquely religiously tolerant.  Yes, trying to stand up to Genghis Khan would get you instantly killed, but as long as you did what he wanted, he was much fairer than many conquerors and you'd do okay.

Mongol strength lay in Genghis' complete willingness to adapt and learn from anywhere, and his insistence on encouraging talent, wherever it was found, rather than promoting his own family and friends regardless of whether they were any good at their jobs.  The Mongols concentrated on commerce, innovation, and communication, so that any new discovery or technology quickly spread over the whole empire, and trade was safe and reliable.

Their downfall was because of their strengths -- when the bubonic plague hit China, it quickly spread everywhere on those efficient travel routes.  But once the plague had arrived, it often shut those same routes down, as stations or villages succumbed.  The empire crumbled over time, but its influence made huge and permanent changes in the world.  I didn't know that Timur (Tamerlane) was a descendant of Ghenghis Khan, and began the Moghul empire in India -- the word Moghul comes from Mongol.  Like the Romans (or the Trojans, even) in Europe, the Mongols served as a symbol of legitimacy in empire and government in Asia.  And in the 19th century, racial theorists had a field day with them.

So this was really a fascinating book, and I'm very happy to have read it.  I learned a lot!  I do think Weatherford is a good deal more pro-Genghis than is really warranted, but I also see where he's coming from in maintaining that Westerners don't realize the massive legacy of the Mongols, and that -- for murderous conquerors, compared to their contemporaries -- they maybe get kind of a bad rap.

I collected a lot of quotations, since I was reading on my tablet and discussing with my kid.  Here are just a few:

In nearly every country touched by the Mongols, the initial destruction and shock of conquest by an unknown and barbaric tribe yielded quickly to an unprecedented rise in cultural communication, expanded trade, and improved civilization.

Temujin took [sons of conquered tribes] into his tribe not as slaves but as members of the tribe in good standing. He symbolized this by adopting an orphan boy from the Jurkin camp and presenting him to Hoelun to raise in her ger not as a slave but as her son. By having his mother adopt the Jurkin boy, as he had her previously adopt one each from the defeated Merkid, Tayichiud, and Tatars, Temujin was accepting the boys as his younger brothers.

Whereas Temujin was a devout shamanist who worshiped the Eternal Blue Sky and the God Mountain of Burkhan Khaldun, the nineteen included several Christians, three Muslims, and several Buddhists. They were united only in their devotion to Temujin and their oath to him and each other. The oaths sworn at Baljuna created a type of brotherhood, and in transcending kinship, ethnicity, and religion, it came close to being a type of modern civic citizenship based upon personal choice and commitment.

Unlike other generals and emperors in history who easily ordered hundreds of thousands of soldiers to their death, Genghis Khan would never willingly sacrifice a single one.  [Weatherford later comments that they didn't care how many other people they killed as long as it preserved Mongol lives.]

The Mongols did not find honor in fighting; they found honor in winning. They had a single goal in every campaign—total victory.

While Ogodei reigned as Great Khan, for long periods of time he was too drunk to lead the empire, and he gradually conveyed administrative power to Toregene, the most capable, although not the senior, wife. At his death in 1241, she became the official regent. For the next ten years, until 1251, she and a small group of other women controlled the largest empire in world history. None of the women had been born a Mongol but had instead been married into the family from a conquered steppe tribe, and most of the women were Christians. Neither their gender nor religion hindered their rise to power nor the struggle against one another as each vied to place the whole empire in the hands of her own son.

[At probably the first multi-religious debate in history] No side seemed to convince the other of anything. Finally, as the effects of the alcohol became stronger, the Christians gave up trying to persuade anyone with logical arguments, and resorted to singing. The Muslims, who did not sing, responded by loudly reciting the Koran in an effort to drown out the Christians, and the Buddhists retreated into silent meditation. At the end of the debate, unable to convert or kill one another, they concluded the way most Mongol celebrations concluded, with everyone simply too drunk to continue.

Rather than relying on government officials to collect and reallocate tribute of grain, arrows, silk, fur, oil, and other commodities, the government increasingly moved money rather than goods. For the first time, a standardized unit of account could be used from China to Persia. So long as the Mongols maintained control of money, they could let merchants assume responsibility for the movement of goods without any loss of government power.

[On the Black Plague]  In 1331, chroniclers recorded that 90 percent of the people of Hopei Province died. By 1351, China had reportedly lost between one-half and two-thirds of its population to the plague. The country had included some 123 million inhabitants at the beginning of the thirteenth century, but by the end of the fourteenth century the population dropped to as low as 65 million.