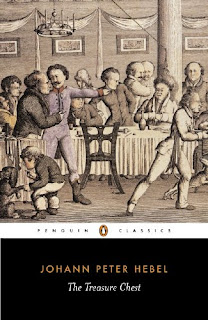 I have no idea how I got this book; it's been sitting on my tablet for some time now.  A few weeks ago I started reading it at bedtime, for which it is perfect, because it's a collection of short little stories, vignettes, jokes, and so on, usually with a little moral theme.

Johann Peter Hebel (1760 - 1826) was from Basel in Switzerland and spoke the Allemanische or Alemannic dialect of German, which is/was spoken in much of Switzerland, Bavaria, and Baden.  He lived in a few different places in those areas, and I'm going to count him for Switzerland.  Hebel became a professor, a poet/writer, and a deacon in the Lutheran Church.  Eventually he rose to become a prelate and a member of the Parliament of Baden, though what he really wanted to do was be a parish priest in the Bavarian/Swiss borderland.  Anyway, in the first years of the 19th century, he also edited a yearly almanac, and he wrote these stories to go in them.

These stories became beloved household tales.  The introduction states that Franz Kafka called "The Unexpected Reunion" "the most wonderful story in the world."  Goethe, Tolstoy, Heidegger, the Grimm brothers, and other literary types admired Hebel's poems and stories; Herman Hesse said, "As far as I know, in no literary history do we yet read that Hebel was the greatest German novelist, as great as Keller and more confident and purer and mightier in effect than Goethe."  Adorno called his essay 'Die Juden' "one of the most beautiful German prose plays in defence of the Jews."  (That essay is not in here but I guess I'd better look it up.)  He's got a literary prize named after him, and statues of him stand in the places he lived.  He's hardly known at all in English.

So I read all these stories, and they are (mostly) charming, delightful little tales that are often funny too.  The only characters that ever reappear are a couple of rogues/thieves who get into trouble every so often.  Hebel calls himself 'Your Family Friend' and inserts his own comments every so often, but not so frequently that you get exasperated.  As you might expect from a collection of stories from this place and time, there are a few Jewish characters that are portrayed as entirely interested in money and not always honest, so that's a shame, and why I said the stories are mostly charming.

As far as I can tell, these stories are part of the bedrock of German literature -- as commonly known and loved as something like, I don't know, "The Little Red Hen" is to English speakers.  So I recommend them to the attention of anyone interested in German literature or popular folk-type tales.