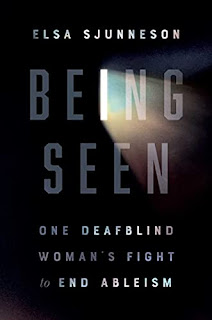 Being Seen: One Deafblind Woman's Fight to End Ableism, by Elsa Sjunneson

A little bit ago I posted that my kid had given me Sitting Pretty, which was on the new bookshelf at my work library, because I'd put it there -- along with Being Seen.  That was actually the one I'd intended to read, so I grabbed it too.  Since eye issues run in my family, and I have my share, I'm always interested in books about low vision and so on.

Elsa Sjunneson is a writer and activist; she's done a lot of writing and editing in SF.  This book is a memoir and meditation on how the world sees disability, and disabled people.  She is Deafblind -- that is, partially sighted in only one eye, and uses hearing aids -- because her mother got a mild case of rubella from an unvaccinated person.*   In each chapter, Sjunneson talks about different aspects of disability and navigating a pretty unfriendly world that isn't set up for disabled people.

At first I found Sjunneson's tone kind of grating, as she was explaining that not everyone who:
uses a wheelchair cannot walk at all;
qualifies as blind lives completely in the dark;
and so on.  She's prickly about it, which is totally understandable, because she's explaining it for the 117 millionth time, but also I'm well familiar with these basic facts and so I prickled a little bit myself.  The rest of the book, however, is stellar and riveting.  Sjunneson is a sharp writer and excels as a truth-teller.
She also talks a lot about how dangerous it is to be a disabled woman, and presents some ugly and harrowing statistics.  Disabled women are extremely vulnerable to violence of all kinds, and police are not usually friends; in Sjunneson's experience, they are usually dismissive, unbelieving, and prone to taking away her aids (for example, confiscating her white cane as a weapon).  Deaf people who can't hear police commands are frequently tackled.

As an SF geek, she also talks a whole lot about depictions of disabled people in media -- mostly in shows/movies I've never seen -- and the one she really likes is A Silent Place.   An awful lot of the time, she points out, disability is used as a marker for evil.  The villain has a pegleg, or a breathing mask.  In Star Trek, disability is only shown as a fixed problem; you don't get people in wheelchairs, because they've all been cured.  Geordi is blind, but his banana-clip visor renders him sighted, so Sjunneson doesn't figure it really counts.  You practically never see disabled people in media shown as valuable they way they are, living ordinary lives, and this is fueled by, and further encourages, a wider perception that disabled people are burdens who shouldn't be out there having lives and stuff.

Which leads straight into a discussion of eugenics, and the fact that it's still around.  In fact during Covid we saw plenty of people argue that in a shortage of equipment, "quality of life" has to be taken into account, and so disabled, old, etc. people shouldn't be taking up that stuff.  I listened, appalled, to a Hidden Brain episode where Peter Singer said exactly that in June 2020.**

I found this to be an excellent book, a great read, and full of material to chew on.  Highly recommended.

*You probably already know that rubella/German measles is very mild, unless a mother contracts it during pregnancy, when it wreaks havoc on the baby, and that's why it's in the MMR vaccine.