The Girl and the Ghost 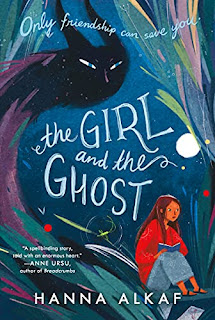 The Girl and the Ghost, by Hanna Alkaf

This is a lovely (and exciting!) story for, say, middle grades and YA, that not only features a lot of scary ghosts, but also explores the meaning of friendship and love, and the very complicated feelings around them.

The ghost is an evil spirit who works for a witch, but the witch is dying.  He can only belong to someone of the same blood, so he searches out the witch's daughter and granddaughter.  The little girl is just five, and welcomes her new friend.  Of course, he needs a name, so she names him...Pink.  Because she's five.  Pink watches over little Suraya, who is a curious and active little girl, and he saves her from myriad dangers.

Pink can't save Suraya from other kids, though.  Somehow she just doesn't fit in.  And when she goes to a fancier school in town, it gets much worse.  Pink's dark nature makes him long to exact revenge on the other girls.  Then a new girl, Jing, moves in and finally, Suraya has a real best friend -- which makes Pink wildly jealous.  He hates Jing even more than the mean girls, and it leads to a blow-up with Suraya.  Unable to cope with his feelings of rejection and hurt, he torments Suraya too, and that leads to disaster.  Now the girls and Pink have a real problem on their hands, and they'll have to uncover a lot of the hidden past in order to survive.

I really liked that the story does not make a big deal out of the setting.  Malay words aren't italicized; they're just there.  Suraya is Malay and Muslim, and Jing is Chinese, and it's not a Thing; they just are.

I highly recommend this one.  I really like how much Pink struggles with his feelings and has to learn to control himself, and the final reveal is amazing.  A great story.