By Jean - January 11, 2021
The Description of a New World, Called The Blazing-World, by Margaret Cavendish, Duchess of Newcastle

Here we have a thing we could probably call a proto-science-fiction novel.  It's got a story and a plot, but it also has massive amounts of talk about natural philosophy.  It was written in 1666 (the year of the Great Fire of London!) to go along with her serious scientific work, the Observations upon Experimental Philosophy.

The story features a young woman who is taken captive on a ship, and travels to another world via the North Pole:

But alas! Those few men which were in it, not knowing whither they went, nor what was to be done in so strange an Adventure, and not being provided for so cold a Voyage, were all frozen to death; the young Lady onely, by the light of her Beauty, the heat of her Youth, and Protection of the Gods, remaining alive: Neither was it a wonder that the men did freeze to death; for they were not onely driven to the very end or point of the Pole of that World, but even to another Pole of another World, which joined close to it; so that the cold having a double strength at the conjunction of those two Poles, was insupportable:...

She arrives in this other world, which, besides its own sun, has many stars blazing in the sky, and is so called the Blazing-World.  There she meets intelligent, talking animals -- not just talking bears, but Bird-Men, Ape-Men, Fish-Men, and even Worm-Men, as well as various races of humans.  They take her on a journey across the world to see the Emperor, and she marries him and becomes Empress.  (After this he hardly appears until near the end.)  As each species has its own specialties of knowledge, they teach her as she asks them questions, which takes up much of the book -- but they cannot answer everything, and some questions remain mysteries.  The Blazing-World is very peaceful and honest, so they teach her about good government (monarchy!), among lots of scientific topics.

After a while the Empress gets to know the Spirits that travel the worlds.  They teach her too, and they show her how souls can travel and visit each other.  She makes a soul-friend -- the Duchess of Newcastle, who is from yet another world! -- and asks the Spirits how her own world of Efsi is doing.  Everyone is attacking her home country, so she builds a submarine and invades, routing her country's enemies and making everyone pay homage to its king instead.  She visits the Duchess' home in her own world, and they have a great time going back and forth.  The Duchess teaches the Empress how to build fictional worlds in her mind, which is a wonderful way to exert absolute power upon a world without messing with the ideal government of the Blazing-World. 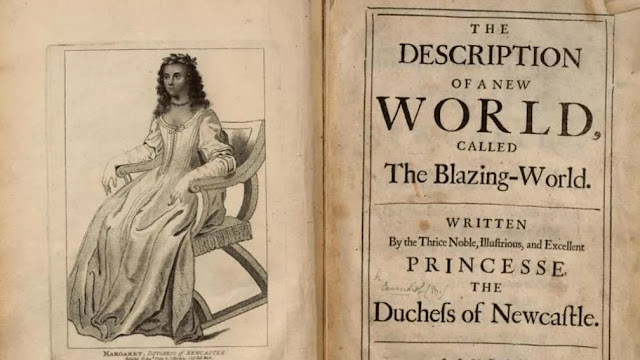 So it's this really interesting text!  It mingles science, imagination, philosophy, and Utopian vision, and I think we can certainly call it an early proto-science-fiction story.   It's had quite a bit of influence on later works -- for one thing, the League of Extraordinary Gentlemen seems to be set in the Blazing World?  and in 2014 Siri Hustvedt published her novel of the same title.

Margaret Cavendish seems to have been quite a woman -- ambitious, literary, and flamboyant -- and I'd love to read a biography of her.  She wrote 13 books in her lifetime, from poetry to science, and apparently hypothesized that light is both a wave and a particle??   Anybody interested in the development of SF, or literary women of history, ought to read this early and classic work.

Like everyone else, I've been busy either watching the news or hiding from the news (in my case, by making little books out of folded paper or collages -- I highly recommend it as an escape).  It feels weird to write about books while all this is going on.  I've also written through several natural disasters and a pandemic, though, and I can't help thinking of Neil Gaiman's admonition:

Life is sometimes hard. Things go wrong, in life and in love and in business and in friendship and in health and in all the other ways that life can go wrong. And when things get tough, this is what you should do.
Make good art.
I'm serious. Husband runs off with a politician? Make good art. Leg crushed and then eaten by mutated boa constrictor? Make good art. IRS on your trail? Make good art. Cat exploded? Make good art. Somebody on the Internet thinks what you do is stupid or evil or it's all been done before? Make good art. Probably things will work out somehow, and eventually time will take the sting away, but that doesn't matter. Do what only you do best. Make good art.
Make it on the good days too.
And Fifthly, while you are at it, make your art. Do the stuff that only you can do.

Meanwhile, may peace and justice prevail.