When They Come for Us, We'll Be Gone 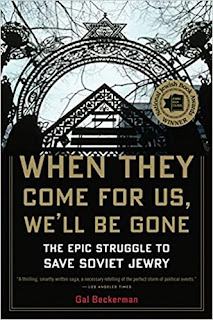 When They Come for Us, We'll Be Gone: The Epic Struggle to Save Soviet Jewry, by Gal Beckerman

Well, this title took me a little longer than I expected it to!  Embarrassing to relate, I started it in January and got bogged down a few times, especially when we started the lockdown.  For a while I couldn't concentrate well at all, and while it's a fascinating history, it's also a fairly heavy-duty book.

This is the amazing history of the struggles of Soviet Jews, and outside efforts to help them.  The dilemma was that, while the USSR didn't really want Jews around, it wasn't willing to let them leave either.   In theory, the Soviets would band together as one; in practice, Jews were always treated as second-class citizens, which kept them out of jobs they were qualified for and made them feel unwelcome.  But if they applied to leave, they would just about always be denied...and would also lose their jobs and social circles.  This meant that even Jews who weren't religious or who felt no particular connection to Judaism -- which were a lot of them -- were pushed to regard themselves as Jews and to want to get out.

In the US, Jewish activists started bringing attention to this problem in the early- and mid-60s.  The history of the non-Soviet side of this movement gets just as much attention as the Soviet side, so we spend a lot of time in New York, Ohio, and Washington DC.  Activists pressured the White House to pressure the USSR to pay more attention to human rights.  Sometimes it worked, and sometimes it didn't, but by the time Reagan and Gorbachev came along, the issue of Soviet Jews was a major one.

Beckerman introduces us to a large cast of characters on both sides of the Iron Curtain, and it's not always easy to keep track of everyone.  It's a fairly comprehensive history -- probably a little more thorough than most people would want at first thought -- but it's always gripping history with wonderful insights into the politics and beliefs on both sides.


...in truth, the Soviets never knew exactly what to do with their Jews.  The Marxist idea was to create one single, socialist society that would eliminate all national, religious, and even ethnic attachments.  But in practice, the Soviet Union's attitude about nationalities, and Jews in particular, was schizophrenic.  On the one hand, from the Bolshevik Revolution onward, Jews were viewed as a people who would soon assimilate into nonexistence and were therefore denied any real opportunity to flourish as a separate culture.  On the other hand, the Soviet state never stopped reminding Jews that no matter how assimilated they became, they were still somehow foreign. (92)

A month after taking power, [Andropov] laid out an ominous-sounding vision for how to solve the nationalities problem in the Soviet Union: "Our end goal is clear.  It, to quote Lenin, 'is not only to bring the nations closer together but to fuse them.'"  This fusion would not be voluntary. (431)

A thorough analysis of an important chapter in history that doesn't get a lot of attention now, and a very good read.  Not light reading though!