By Jean - April 06, 2020
The Spellcoats, and
The Crown of Dalemark, by Diana Wynne Jones

Last Witch Week, I read Drowned Ammet and Cart and Cwidder (which I then did not post about, since I went on a hiatus instead), so it seemed only fair to read these two for March Magics.  And of course, they were lovely.  Although I think that DWJ's refusal to spend a tremendous amount of time in any one world was a strength and a good thing, I sure would love a couple more Dalemark stories.  Maybe the story of Manaliabrid, or where Ammet and Libby Beer fit in with the others.  I would very much like to have about 300% more information about Dalemark history, especially about my favorite character, Tanaqui. 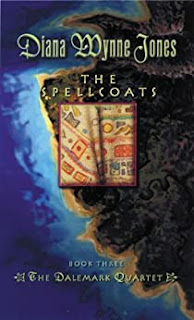 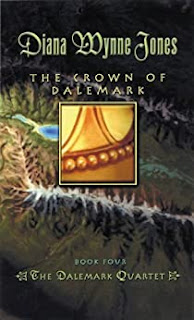 Spellcoats is such a fascinating novel, to my mind.  It's a 'found documents' story, in which the novel is translated from artifacts found in an archaeological dig -- but the artifacts are "rugcoats," woven robes in which the weaving actually forms words for those who can read it.  These artifacts are prehistoric, dating from before Dalemark had written history, and were woven by the younger sister of the legendary first king of Dalemark.  I love the inclusion of weaving as an important activity.

Tanaqui is only about 13 or so, but she is an expert weaver, and that makes her a magic-maker as well.  Kankredin and his mages literally weave their spells and wear them in their robes, which is what makes them work, and Tanaqui is doing the same in order to fight them.  Putting her story into the weaving gives it power and force, and makes it true, in yet another example of DWJ's theme of having things come true at characters.  Since we can only read what she put into her weaving, we get this sort of diary format that feels real, yet frustratingly incomplete because we don't know the rest.

Dalemark is where DWJ came closest to making up a new language like Tolkien did, but she mostly put it into these two novels, written a good 20 years apart.  Spellcoats is all about language and thought and how they can be used, and The Crown of Dalemark continues those themes -- and has a handy glossary in back that gives some nice hints to fill out the picture a bit, but still doesn't cover everything.  Not only that, but the glossary is also a 'found document,' written by a Dalemark historian, and contains mistakes because the historian doesn't have a complete picture, and doesn't know some things that we do know.

Crown of Dalemark ties up the quartet by bringing together three time periods.  Maewen is a 13-year-old girl living in a modern, industrialized Dalemark, two hundred years after Drowned Ammet and Cart and Cwidder, which take place unknown centuries after the events of Spellcoats.  Maewen is sent back in time to travel with Mitt, Moril, and Wend -- who is Tanaqui's youngest brother.

I remember buying a somewhat beat-up copy of Spellcoats, which was published in 1979, and my copy was probably nearly that old.  I bought it at the Berkeley Book Consortium, which is long gone, around 1993ish -- which is right when Crown of Dalemark was being published, but I didn't know that and didn't come across it for a few years.

To sum up, if you've never read the Dalemark Quartet, I hope you will.

Otherwise, there's not much to tell.  We're home all the time, school is now canceled for the rest of the semester, and I'm usually desperate to get outside at least once a day.  I feel very fortunate that so far the weather has stayed nice and cool; we've had two spells of rain since this started, which we really needed.  I love walking on a cold, cloudy, windy day.

My youngest kid turned 17 last week, and we celebrated with a yummy dinner with grandparents (we see them all the time, so they're part of our quarantine pod) and homemade pie and ice cream.  It was a pretty weird birthday for her.  My mom and I also took her on a hike, and we took a different trail than we usually have, and found a neat ravine with a waterfall.  17yo thought it looked like a storybook, and I must say I agree.  See? 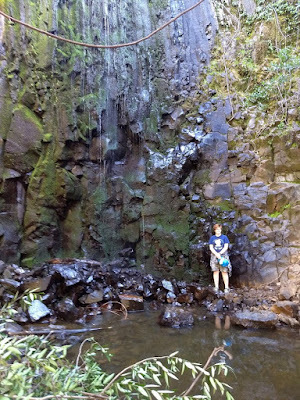 I want so much to hear how all my bloggy friends are doing, and I'm trying to keep up with all of you, but my blog reader still has a good 300 articles waiting because of my lack of concentration.  So I hope you'll be patient with me when I show up and comment on your post a week late. <3 p="">