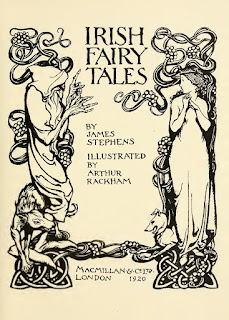 I wanted to read something for Cathy's Reading Ireland 2020 event, but my TBR pile did not hold any modern Irish literature.  It did hold this volume of Irish tales, retold by James Stephens, and as a bonus, it turned out to be illustrated by Arthur Rackham.  In fact it's a lovely volume all 'round, though sadly missing its dust jacket.  My copy is a modern reprint of the 1920 original.

Most of the stories are about Fionn mac Uail (in this version; I've seen it spelled other ways and in English it's Finn MacCool), the heroic leader of the Fianna Finn.  There are some other tales as well, such as the story of the man who hated dogs, the 'carl with the drab coat' who ran a race over Ireland with a foreign king, and the Hag of the Mill.

One of the great joys of this collection of stories is Stephens' language, which is lovely and descriptive, and often very very funny.  I could not resist sharing some of the bits that made me laugh, so here they are, far too many, but you won't be sorry.  I won't write much of a post here, I'll just share these:


He learned to jump by chasing hares in a bumpy field. Up went the hare and up went Fionn, and away with the two of them, hopping and popping across the field. If the hare turned while Fionn was after her it was switch for Fionn; so that in a while it did not matter to Fionn which way the hare jumped for he could jump that way too. Long-ways, sideways or baw-ways, Fionn hopped where the hare hopped, and at last he was the owner of a hop that any hare would give an ear for.

The king kissed him on both cheeks.
“Indeed, my dear heart and my son, we are not scolding you, but you must try not to look so terribly thoughtful when you think. It is part of the art of a ruler.”
“I shall never master that hard art,” lamented his fosterling.
“We must all master it,” Dermod replied. “We may think with our minds and with our tongues, but we should never think with our noses and with our eyebrows.”

But that did not prevent Goll from killing Fionn’s brother Cairell later on, nor did it prevent Fionn from killing Goll later on again, and the last did not prevent Goll from rescuing Fionn out of hell when the Fianna-Finn were sent there under the new God. Nor is there any reason to complain or to be astonished at these things, for it is a mutual world we llve in, a give-and-take world, and there is no great harm in it.


Being a king he had authority to ask questions. Conn asked her, therefore, all the questions that he could think of, for it is not every day that a lady drives from the sea, and she wearing a golden-fringed cloak of green silk through which a red satin smock peeped at the openings. She replied to his questions, but she did not tell him all the truth; for, indeed, she could not afford to. She knew who he was, for she retained some of the powers proper to the worlds she had left, and as he looked on her soft yellow hair and on her thin red lips, Conn recognised, as all men do, that one who is lovely must also be good, and so he did not frame any inquiry on that count; for everything is forgotten in the presence of a pretty woman, and a magician can be bewitched also.

The High King did not know where exactly he should look for such a saviour, but he was well educated and knew how to look for whatever was lacking. This knowledge will be useful to those upon whom a similar duty should ever devolve.

“Master,” said mac an Da’v as the troop drew abreast and moved past.
“What is it, my good friend?”
“Let me throw a little small piece of a rock at the King of Leinster.”
“I will not.”
“A little bit only, a small bit about twice the size of my head.”
“I will not let you,” said Mongan.

Now the Hag of the Mill was a bony, thin pole of a hag with odd feet. That is, she had one foot that was too big for her, so that when she lifted it up it pulled her over; and she had one foot that was too small for her, so that when she lifted it up she didn’t know what to do with it. She was so long that you thought you would never see the end of her, and she was so thin that you thought you didn’t see her at all. One of her eyes was set where her nose should be and there was an ear in its place, and her nose itself was hanging out of her chin, and she had whiskers round it. She was dressed in a red rag that was really a hole with a fringe on it, and she was singing “Oh, hush thee, my one love” to a cat that was yelping on her shoulder.

In the first battle three hundred of the men of Lochlann were killed, but in the next battle Eolgarg Mor did not fight fair, for he let some venomous sheep out of a tent, and these attacked the men of Ulster and killed nine hundred of them.
So vast was the slaughter made by these sheep and so great the terror they caused, that no one could stand before them, but by great good luck there was a wood at hand, and the men of Ulster, warriors and princes and charioteers, were forced to climb up the trees, and they roosted among the branches like great birds, while the venomous sheep ranged below bleating terribly and tearing up the ground.
Fiachna Fim was also sitting in a tree, very high up, and he was disconsolate.
“We are disgraced,” said he.
“It is very lucky,” said the man in the branch below, “that a sheep cannot climb a tree.”
“We are disgraced for ever,” said the King of Ulster.
“If those sheep learn how to climb, we are undone surely,” said the man below.
“I will go down and fight the sheep,” said Fiachna. But the others would not let the king go.
“It is not right,” they said, “that you should fight sheep.”

Now if the sheep were venomous, this dog was more venomous still, for it was fearful to look at. In body it was not large, but its head was of a great size, and the mouth that was shaped in that head was able to open like the lid of a pot. It was not teeth which were in that head, but hooks and fangs and prongs. Dreadful was that mouth to look at, terrible to look into, woeful to think about; and from it, or from the broad, loose nose that waggled above it, there came a sound which no word of man could describe, for it was not a snarl, nor was it a howl, although it was both of these. It was neither a growl nor a grunt, although it was both of these; it was not a yowl nor a groan, although it was both of these: for it was one sound made up of these sounds, and there was in it, too, a whine and a yelp, and a long-drawn snoring noise, and a deep purring noise, and a noise that was like the squeal of a rusty hinge, and there were other noises in it also. 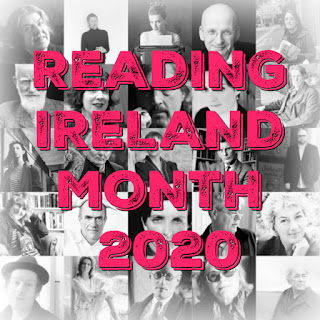