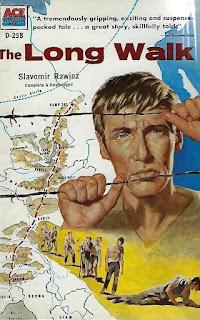 The Long Walk: A Gamble for Life, by Slavomir Rawicz and Ronald Downing

Well, this was certainly an interesting read, and not for the reasons I thought it would be.  It came across the book donation table, and I thought it looked interesting.  My mom said it was a bestseller in its day -- the memoir of a man who had escaped from a Siberian gulag and walked to India.  Well, I couldn't resist that!

But I was a bit startled when I started to read the foreword, by Ronald Downing (a reporter who wrote the story as Rawicz told him), and it starts with


My newspaper, the London Daily Mail, was launching an expedition into Nepal to seek the yeti, or Abominable Snowman, of the Himalayas...

Wait, what??  Downing goes on to explain that he met and interviewed Rawicz because he'd seen yetis, and insisted on telling the entire story, since the encounter with the yetis was pretty minor really.  In fact, it takes up maybe a page or two in the whole book.

So I started reading, with some puzzlement.  It started off with Rawicz, a Polish cavalry officer, getting captured, imprisoned, and tried by the NKVD in 1939.  He was sentenced to the gulag and the first several chapters are dedicated to getting there, with weeks on the way.  (The camp itself is relatively comfortable compared to the trip, once they build their barracks, and it's not like it's any fun there.)

At about this time, I mentioned the yeti part to my mom, who had forgotten about it.  She said that in 1956, when it was published, people took the yetis pretty seriously, but it had been called into question later.  So I decided to look up this Slavomir Rawicz on the magical internet; surely there would be something.  And of course I found a Wikipedia entry!  The short version is: in 2006 people figured out that Rawicz did not escape from a gulag and walk to India, although quite possibly some other men did.  Rawicz was released in 1942 as part of an amnesty for Poles.

So that was disappointing, but by this time I was halfway through a short book and decided to keep going to see how it turned out.  Rawicz tells a very exciting story of escaping along with six other men.  Soon they pick up a young Polish woman who has run off from the collective farm she had been sent to, and they all travel together.  It's all plausible enough until they get to the Gobi desert.

The trek through the Gobi desert is, quite frankly, incredible.  As in not credible.  Rawicz claims that they walked through the desert heat for six days without water or food before finding an oasis.  It's then a good twelve days until they find water again.  (Two people die during this part.)  Then there are uncounted days in which their only source of moisture is the snakes they kill for food.  Now, as I understand it, a human being can generally survive about three days without water, with some variables, maybe a bit longer.  But there is no way that I believe these guys could walk through a desert for twelve days with no water or food.

After that they wander through the Himalayas (which sounds as improbable as the Gobi desert part), sight a couple of weird tall creatures, and eventually stagger into India with the last of their strength, meeting a patrol of soldiers led by a British officer.

So, I guess it's mostly fiction, though Rawicz did in fact serve in the Polish cavalry and go to the gulag.  I am kind of bummed that he would steal somebody else's story, if it happened at all.  I thought this would be an item for my History Non-Fiction Reading Challenge, but...nope.  It's basically a novel.  It's still in print and was made into a movie; but the current edition still claims to be a memoir.
memoir/biography